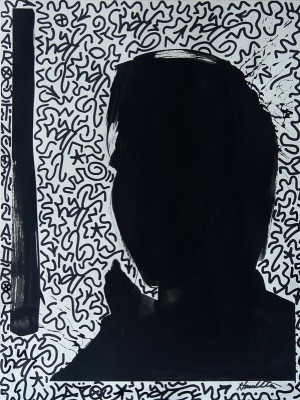 The first widely publicized public art works of Richard Hambleton was a series from 1976-1979 entitled Image Mass Murder. In this noteworthy series, Richard Hambleton staged fictitious and graphic murder scenes using chalk outlines and red paint in relatively low crime areas for maximum effect. First, the artist painted a police chalk outline around bodies of volunteer homicide victims. Then, Richard Hambleton splashed some red paint to look like blood splatter on the outline, leaving behind a realistic looking crime scene. The Image Mass Murder series resulted in 600 crime scenes on the streets of 15 major cities across the United States and Canada.

Richard Hambleton works were found in major cities without the public being made aware of the conceptual nature behind them or the name of the artist. Graffiti art had been seen in public spaces long before, but few artists exposed their works as public art as opposed to exhibiting them as did Richard Hambleton. The Image Mass Murder crime scenes startled and shocked many pedestrians who saw them. These public art works lead to the artist being called a Psychic Terrorist and a Sick Jokester on the front cover of the San Francisco Examiner. According to Richard Hambleton “If you paint a murder scene on canvas, it just looks like a painting.” He was delighted when viewers responded to his work as if it had the intensity of a real murder.

From 1980 to 1981, Richard Hambleton plastered 13 cities with 800 life size unsigned posters titled I Only Have Eyes for You. These portraits featured the artist himself in disguise dressed smartly in a suit, hand tucked Napoleon style in his jacket with his eyes wild, crazy and staring. These mysterious portraits on blueprint paper over time faded to white silhouettes which was a prelude to his Shadowman series. 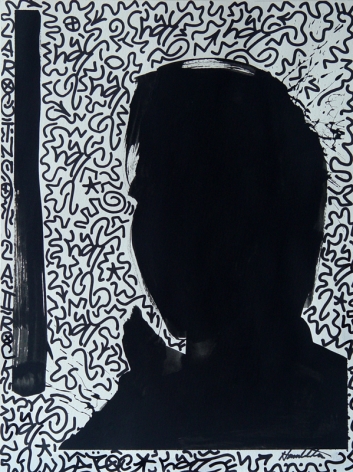 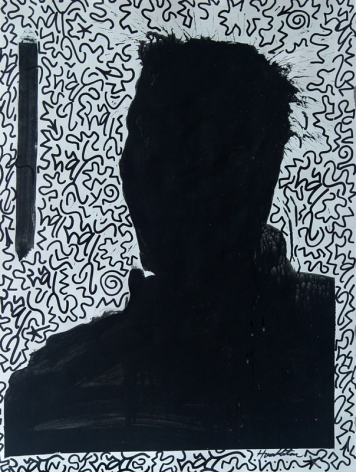 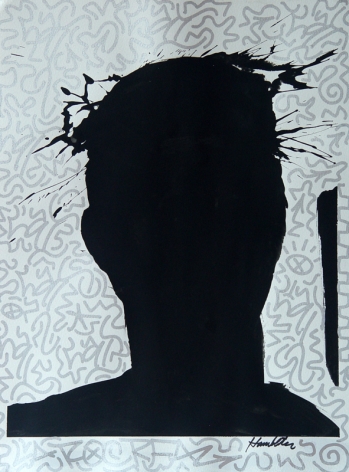 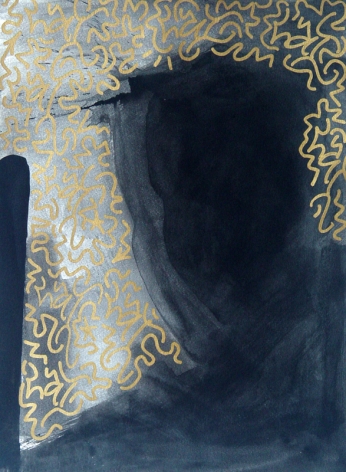 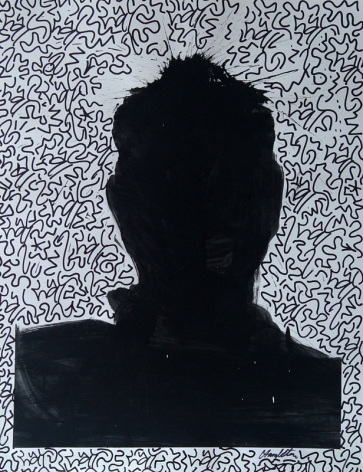 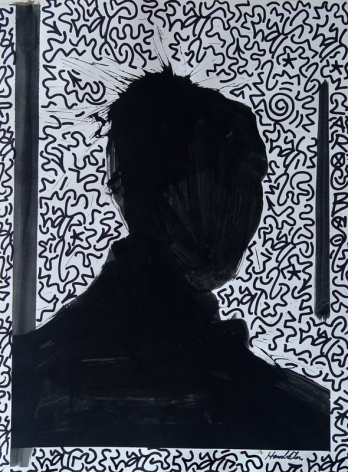 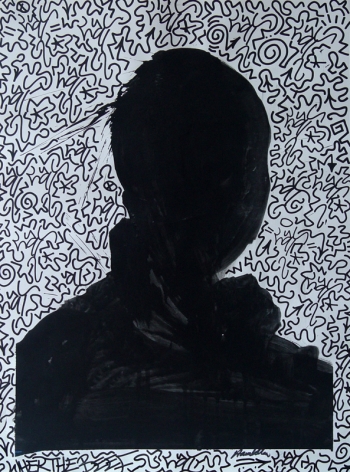 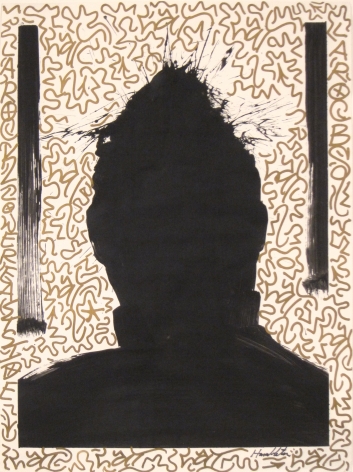 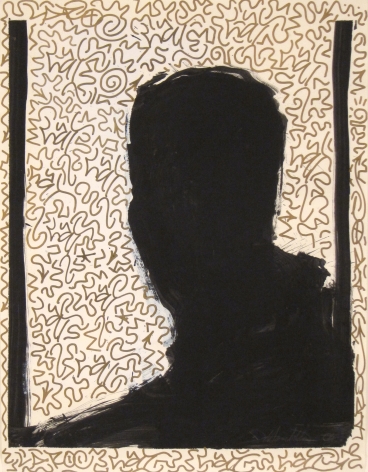 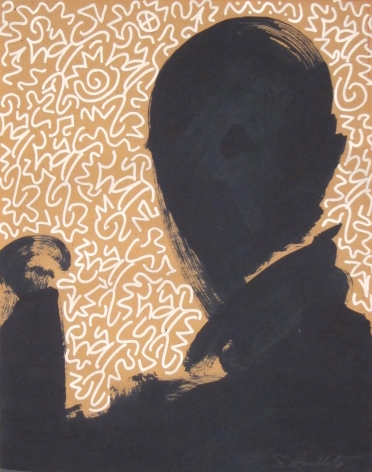 In 1982, Richard Hambleton began his most widely known public art works which the artist called Nightlife and became best known as the Shadowman series. Richard Hambleton became most famous for his Shadowman paintings where the artist painted over 450 dark and ominous shadow figures into the landscape of New York City during a crime wave from 1982-1986. Each painting resembled a life-sized silhouetted image of some mysterious person that resembled a splashy shadow figure. These shadow paintings were splashed and brushed with black paint on hundreds of buildings and other structures across New York City. Locations were believed to be calculated for maximum impact upon unsuspecting pedestrians and cab drivers. Shadowman paintings by Richard Hambleton could be found in a dark alley, side street or lurking around an unexpected street corner. According to Richard Hambleton “I painted the town black – I’m not trying to make a specific statement with them…They could represent watchmen or danger or the shadows of a human body after a nuclear holocaust, or even my own shadow. But what makes them exciting is the power of the viewer’s imagination. It’s that split-second experience when you see the figure that matters.”

Later, the artist expanded the scope of his public art works and painted these Shadowman in 24 cities across America and eventually to Europe in cities including Paris, London, Venice and Rome. In 1984, Richard Hambleton painted 17 life size figures on the East side of the Berlin Wall and returned a year later to paint more figures on the West side of the Berlin Wall. As a result of these very public art works, the Shadowman series became famous around the world.

Richard Hambleton became best known as a conceptual artist and was one of the founding figures of the Lower East Side art movement in New York City. Richard Hambleton was an integral figure in the street art movement of the 1980s and is the only surviving member of a group including close friends Keith Haring and Jean-Michel Basquiat. The latter frequently added his own tags to the Shadowman, painting his signature skulls, crowns and cat’s heads onto the silhouettes creating prized hybrids. These artists had great success and created a sensation coming out of the New York City art scene during the booming art market of the 1980s.

Although many have compared the work of Richard Hambleton to graffiti art, the artist considered his work to be public art. His street art created controversy and he was accused by some of vandalism and promoting graffiti. Richard Hambleton was never caught in the act by police and defended his work saying “I don’t go out of my way to deface someone’s property – I just know there are some forms of expression that work so well in the city that they have to be done out there.”

As with many street artists, Richard Hambleton retired from pounding the pavements and he turned his energy to creating paintings in his studio. Moving beyond public art, Richard Hambleton produced a variation of his shadow work, showing his Shadowman as a rodeo man or rugged Marlboro Man riding a bucking horse in swirling motion. This series was painted on canvas and other materials, where they could be displayed as works of art. Inspired by the Marlboro cigarette magazine advertisements, which in some ways exploited the image of a uniquely American hero to sell its product, Richard Hambleton appropriated and modified the image to create a new series of work.

These paintings of a black silhouette vary between those ghosted in layers of white paint and others on a glittering pink background. Most striking are his dynamic ink blots or shadow paintings of men wielding guns, leaping through the air, posing moodily and leaving flecks of black in their wake. Some paintings even have the Marlboro lettering of the advertisement showing through a layer of transparent paint, which presents to the viewer the original inspiration behind the work, together with the dramatic alteration and personal expression by Richard Hambleton. The result is a statement of how the boundaries between art and life can be disrupted. The viewer is put into a position of confronting his or her preconceived ideas on various subjects not unlike the viewer who might have stumbled upon one of the public art works by Richard Hambleton. In addition to the Marlboro Man image, the surrounding landscape called Marlboro Country in the advertisements was transformed to become part of the overall theme of this series.

At the height of his fame, Richard Hambleton was exhibited at the Venice Biennale in 1984. According to New York Times art critic Michael Brenson, when commenting on the exceptional skill of Richard Hambleton “Hambleton can handle paint – When he throws white or black on the canvas, his waves break, his rodeo rider bucks, a man shot seems blown apart.”

In 1985, Richard Hambleton disappeared from the art world, when he holed up in his Lower East Side apartment and studio with only heroin and hookers for company. At one point, an ex-girlfriend stole 40 of his paintings and sold them for a fraction of their value which left the artist living very rough. His close friends Keith Haring and Jean-Michel Basquiat both died young, but somehow Richard Hambleton survived this turbulent period. After his close friends succumbed to drug use, Richard Hambleton became reclusive and continued to work in relative solitude for almost 20 years. The artist stopped sharing his work, refused commercial representation, turned down exhibitions and instead chose to sell his work on an ad-hoc basis when he needed to pay his rent. The once ubiquitous scourge of the streets had become a recluse. Richard Hambleton did not believe that social recognition defined an artist. Therefore, despite the growing fame that followed his close friends Keith Haring and Jean-Michel Basquiat, Richard Hambleton rebelled against it and his reputation faded.

During his absence from the commercial art world, Richard Hambleton created a new body of work he entitled Beautiful Paintings. In this series of quieter landscapes, Richard Hambleton used transparent paint on a metallic leaf background in order to reflect light and color to and from the viewer, who unwittingly becomes part of the visual effect. Some works were done with metallic leaf on canvas and others on a mirror-like or metallic surface. The strong use of color in this series stands in stark contrast to his shadow paintings. These painting by Richard Hambleton are characterized by shimmering blues and greens, apocalyptic reds and oranges and giant foaming waves made by hurling white paint at the canvas and then frantically working at it with his fingertips. Richard Hambleton has stated that these works were a reaction against the abundance of figurative paintings displayed in galleries at the time. Richard Hambleton chose not to include figurative work of his own and he intentionally sought out a different mood with a different sensibility from his previous works.

In 2009, the works of Richard Hambleton were displayed in a retrospective exhibition Richard Hambleton – New York which celebrated his 30+ year career as an artist. The exhibit was the result of a collaborative effort between Vladimir Restoin Roitfeld, Andy Valmorbida and Giorgio Armani. Forty works by Richard Hambleton from the early 1980s to the present were exhibited including works from his Shadowman, Marlboro Man and Beautiful Paintings series. In addition, the show featured a series of photographic images taken by Hank O’Neal, who is a well known photographer, author and music producer. In 1982, Hank O’Neal took many photographs of the Shadowman works around New York City. The photographer sought out examples of the Shadowman to photograph because he felt they were interesting examples of graffiti art which was so prevalent at the time. The Shadowman photographs are stunning in their beauty and realism. These photos serve as art and documentation that brings an honest perspective to the nature of the early 1980s public art of Richard Hambleton. The Richard Hambleton – New York exhibition was heavily publicized and featured as part of New York Fashion Week. The show was designed to be an art event similar to those in the days of Andy Warhol. The show was a great success and all of the artwork sold-out.

Richard Hambleton has been called “The Godfather of Street Art” and his art continues to be a working model for emerging street and conceptual artists. In October 2009, Papermag wrote of Richard Hambleton “Memo to Banksy: You owe Richard Hambleton a small fortune in royalties. You too, KAWS. Richard Hambleton’s early 80′s onsite works-dynamic, painted Shadowmen on street corners and in alleyways-are clear precursors of the early 2000′s graffiti-art boom, and Richard Hambleton himself, a contemporary of Keith Haring and Jean-Michel Basquiat, one of its unsung godfathers.” According to Blek le Rat, the artist he admired “From the old school I really like Richard Hambleton. This American artist from NYC was the first street artist to export his work all over the world. It was really incredible to do that in the beginning of the 80′s! Richard Hambleton’s Shadowman that I discovered in Paris were a great inspiration to me. This guy put his shadows in every city in Europe and so you could find them in Paris, London, Roma and Berlin. He was the first to export his work to the urban space of cities all around Europe. He’s the only artist I ever bought a painting off, one of the greatest.”

Renewed interest in “The Godfather of Street Art” has firmly solidified that Richard Hambleton holds a distinguished place in the history of modern art. This was further solidified when Beautiful Paintings by Richard Hambleton was recently installed in the plush and starchily formal dining room of the Four Seasons Hotel in New York City.