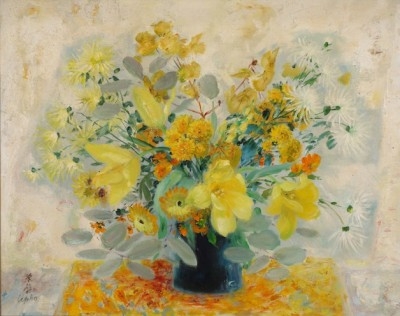 Le Pho was a French-Vietnamese painter best known for his stylized depictions of nudes, gardens, and floral still-lives. His work succeeded in merging Impressionism, Surrealism, and traditional Chinese painting into a sensual yet disconcerting vision of Eden, reminiscent of both Odilon Redon and Pierre Bonnard. Le Pho has garnered himself a place in Vietnam’s art canon, for his oeuvre is a collection of works that are poetical depictions of domestic scenes that were memories from the artist’s own childhood of growing up in Hanoi. Le Pho’s favored subject matter revolved around what he deemed to be beautiful and pleasing to the eye, thereby much of his paintings are visual homages to flora and fauna, and elegant women either alone or shown with their children in private interludes as vignettes from family life.

Born on August 2, 1907 in Hanoi, Vietnam, Le Pho had a cosmopolitan background even as a young art student. He studied at the École des Beaux-Arts in Hanoi before attending the École des Beaux-Arts in Paris on a scholarship in 1932, studying under Victor François Tardieu. Victor Tardieu was the founder of the school as well as the only French national who championed the creative identity of Vietnamese artists. Prior to Victor Tardieu’s arrival to Hanoi in the early twenties, there was no true identity in local Vietnamese paintings. However, with the French teacher’s encouragement and patience, he taught many local artists how to combine their personal histories with Western painterly techniques. As the country was under French colonialist rule during this period, it is no surprise that many of the artists that the Vietnamese painters familiarized themselves with included Henri Matisse and Claude Monet, two individuals who had a definite impact on French artistic expression. Tardieu himself studied alongside Matisse back in Paris, and together with this experience and respect for the older artist, he shared this influence with the local Vietnamese artists when he founded the school in 1925 in Hanoi.

In 1933 on his return to Hanoi, he was appointed professor in the Hanoi Ecole des Beaux-Arts, a post that he held from 1933 to 1936. This is where he developed his signature style and subjects: delicate paintings of elegant Vietnamese women mixed with floral still-lives.

Le Pho’s professorship in Hanoi came to an end when he was sent back to Paris in 1937 as a delegate to the International Exposition in Paris and served also as a member of the jury of this Exposition. Since that time Le Pho stayed in France. He had his first one-man show in 1938. Also he served as artistic advisor to the Embassy of Viet Nam in Paris and was a prizewinner in the International Exhibition of Beaux-Arts of Saigon.

As an individual whose romanticized depictions of Vietnamese daily life did not fare well with the Communist ideals of the early forties, Le Pho left Vietnam to live in Europe and remained there the rest of his life. The artist was highly skilled in painting with oil and with watercolors, and often chose to paint on silk rather than canvas to instill an ethereal and otherworldly charm to the works.

An artist whose oeuvre is a visual celebration of a specific period in Vietnam’s history, Le Pho painted works that act as a guide to a world that no longer exists. To look at his works is to share in the artist’s memory as a youth growing up in Hanoi during the turn of the century, and to experience similar emotions of nostalgia, happiness, and loss.

Throughout his life, he had several exhibitions in Paris, New York, Chicago, San Francisco and Buenos-Aires. He participated in shows annually at the Salon d’Automne and the Salon des Independants in Paris.

Today his works are held in the collections of the Musée d’Art Moderne in Paris and the Oklahoma Arts Center, among others.