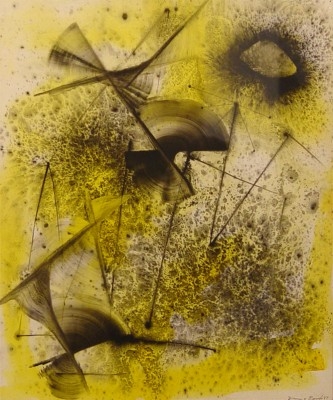 Composition in Yellow and Black, 1947

Jimmy Ernst decided early in life not to become an artist, for fear of being in the shadow of his father, Max Ernst. Suddenly, at the age of twenty, he felt the urge to paint, but not in the surrealist style of his father. He was brought up by his mother, Louise Straus, in Cologne, after his parents were divorced. Jimmy Ernst’s ethical grounding was instilled by his mother, who was Jewish and a journalist and led him to understand that his father’s emotional cruelty did not amount to much in light of the Nazi’s actual threats.

The artist studied at Cologne-Lindenthal Real-Gymnasium and the Altona Arts and Crafts School where he completed a three year apprenticeship in printing and typography. In 1928, Jimmy Ernst went to Colorado with anthropologist Gladys Reichard and worked with Navajo Indians. In 1938. he emigrated to the United States to escape the Hitler regime; he left Germany just a week before Kristallnacht. His mother died in a German concentration camp.

Jimmy Ernst’s name and connections landed him a job at the Museum of Modern Art as office boy. In 1941, Peggy Guggenheim, patroness of the arts in New York, hired him as her personal assistant. Later he worked with advertising agencies and art galleries. Jimmy Ernst taught at the University of Colorado, summers of 1954 through 1965, the Museum of Fine Arts of Houston 1956, and Brooklyn College. The artist lectured extensively at Pratt Institute. He was the winner of many awards, had many one-man shows and was included in group shows throughout the United States and the rest of the world. He began experimenting with automatism (use of free visual association to produce bizarrely original images). In the late 1940′s, Jimmy Ernst went through his “jazz” period, i.e. his improvisations gained shape and metaphoric weight using vibrant, vareigated colors, gradually changing to purifying blacks and whites. His powers of composition and paint handling increased, reasserting control over his imagery.

In 1961, Jimmy Ernst traveled through Russia and Europe on grants from the Guggenheim Foundation and the State Department. At the age of sixty-three, he died at a Manhattan radio station hours after having hung a show. He was waiting to appear on a talk show promoting the show and a book. He was married to Dallas Bauman Brody. They had one daughter, Amy Louise who is a Music Administrator and a son Eric, a painter. Jimmy Ernst was made a member of the American Academy of Arts and Letters in 1983. He died on February 6, 1984.

Sources include:
Dictionary of Contemporary American Artists by Paul Cummings
World Artists 1950-80 by Claude Marks
From a review of a book by Donald Kuspit written by Hilarie M. Sheets in ARTnews, May 2001