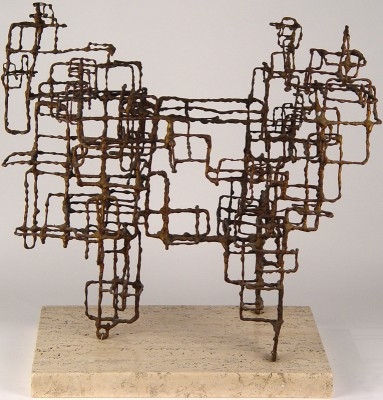 Ibram Lassaw was a sculptor known for his open-space welded sculpture of bronze, silver, opera, and steel. Influenced by Surrealism, Constructivism, and Cubism, Ibram Lassaw pioneered a welding technique that allowed him to create intricate, complex sculpture in three-dimensions. Ibram Lassaw intended to make structures that were meaningful in itself rather than communicate an idea or representation. The titles of his works were vague terms, so they would not significantly shape the audience’s interpretation of his art. From his interest in the internal structures in nature, cosmology, astronomy, and technological construction, Ibram Lassaw sought to create an experience that would make his viewers lose themselves within the complex interiors of his sculpture. This creation and enclosure of internal space later became prevalent in Minimalist sculpture. The devotion and innovation of Ibram Lassaw to his work helped shape New York sculpture.

Ibram Lassaw was born on May 4, 1913 in Alexandria, Egypt to Russian-Jewish parents. From a young age, he was very interested in art. At the age of four, Ibram Lassaw began to make works in clay. After briefly living in Marseille, Naples, Tunis, Malta and Constantinople, his family settled in Brooklyn, New York in 1921. During his childhood, Ibram Lassaw created animals and figures using pieces of tar from the street. At a young age, the history of art fascinated him. When he was twelve, Ibram Lassaw began gathering an extensive collection of clippings and art reproductions, eventually filling thirty-three scrapbooks.

When Ibram Lassaw saw the exhibition of Katherine Dreier’s famed “Societe Anonyme” collection, which included the work of Jacques Villon, Sophie Taeuber-Arp, and Wassily Kandinsky at the Brooklyn Museum in the winter of 1926-1927, it left a haunting impact on him. It stirred an interest in him to create art that was just like the works in the exhibition. In 1927, Ibram Lassaw had his first formal training at the Brooklyn Children’s Museum, attending classes that were taught by Dorothy Denslow. The museum later became the Clay Club which is now the Sculpture Center. At the Clay Club, Ibram Lassaw learned modeling and casting, skills that he refined during his year at the Beaux Arts Institute of Design in 1930-1931. In 1931, Ibram Lassaw spent a year studying at City College of New York. He left the Clay Club in 1932.

Continuing to expand his interest in all forms of art, Ibram Lassaw read over many issues of the influential Cahiers d’Art, a notable French artistic and literary magazine through which he learned about Cubism, Futurism, Constructivism, Dadaism, and Surrealism. The artist became particularly interested in the use of new and unconventional materials to create artwork, as well as in the concept of a sculpture that either contained or were structured by open spaces.

The interest of Ibram Lassaw in abstraction in the 1930s began with Constructivist drawings. However, it was the English language version of Laszlo Moholy-Nagy’s The New Vision, and several articles on “Universal Architecture” by Buckminster Fuller that gave Ibram Lassaw a framework for understanding this new art. The importance of Moholy-Nagy’s book to Ibram Lassaw was for its illustrations of the tactile experiments conducted at the Bauhaus that suggested new materials and sculptural processes. Buckminister Fuller opened up new perspectives for Ibram Lassaw because Fuller discussed the similarities between architectural design and natural systems such as trees and the human body. Between 1933-1934, Ibram Lassaw started to create open-space abstracted sculpture, made from plaster on wire armatures. The sculptor had already experimented with abstracted forms in the previous years.

Beginning in 1933, Ibram Lassaw became involved with the Works Project Administration (WPA) Federal Arts Project and similar organizations. In addition, the artist briefly worked for the Public Works of Art Project cleaning sculptural monuments around New York City. In 1936, Ibram Lassaw co-founded American Abstract Artists, and later served as the organization’s president from 1946-1949. During this time, Ibram Lassaw was working with a broad range of materials, maintaining his interest in untraditional media, particularly those that referenced technology, such as steel and iron. The works of Ibram Lassaw from this period vary from ornate and baroque to rectilinear and precise.

By the late 1930s, the artist moved from plaster and wood on wire to sheet metal and hammered forged steel. Around 1937, Ibram Lassaw began constructing sculpture. From an old refrigerator motor, the artist improvised brazing tools and began to build frameworks with iron rods. To these structures, which he also painted, Ibram Lassaw connected carved white wooden shapes. Three of these open-space works by Ibram Lassaw: Sculpture (aka Pot Jumping Through Hoop) (1935), Sculpture (1936), and Sing Baby Sing (1937) all made using plaster and wire, were exhibited at the first group show of the American Abstract Artists at the Squibb Gallery in 1937. At the 1938 annual exhibition of the American Abstract Artists, Ibram Lassaw showed a series of shadow boxes, shallow wooden containers holding plaster-coated wire, mesh, and free-form organic shapes that were lighted with electric bulbs. In these works, the artist sought a formal balance between geometric and organic form.

Much of the experimentation of Ibram Lassaw during the 1930s focused on process–finding appropriate methods to express dual respect for space and “truth to materials.” The sculptor gave up plasterwork, as it was too fragile for open-form sculpture. Ibram Lassaw briefly tried liquid latex, which for a variety of reasons, including its smell, was unsatisfactory. Along with the abstract artist Getrude Greene, Ibram Lassaw bought a forge and attempted using a hammering steel, but he found the results excessively two-dimensional.

In the 1940s, Ibram Lassaw began concentrating on rectilinear shapes. When he exhibited a steel and plastic sculpture entitled Intersecting Rectangles in the 1941 American Abstract Artists exhibition, the artist Piet Mondrian encouraged him to proceed along ‘Neo-plastic lines.’ During the next several years, Ibram Lassaw experimented with geometric, Constructivist spatial configurations, often combining steel with plastic and Lucite. While each approach offered intriguing possibilities, none enabled the sculptor to work freely and intuitively. However, his artistic focus was interrupted by army service; from 1942 to 1944, Ibram Lassaw served in the U.S. Army in Virginia, where he also learned to weld while fixing army vehicles.

Beginning in 1946, following the discharge of Ibram Lassaw from the army, the artist created a series of hand-painted “projection paintings.” These miniature Abstract Expressionist paintings applied to 2×2-inch glass slides, when viewed through a projector, cast an array of colored-light images. Unlike abstract paintings, which could be rotated on the wall and viewed from four different perspectives, the “projections” by Ibram Lassaw could be rotated and turned around, offering the viewers eight different possible vantage points. By 1949, Ibram Lassaw stopped producing these paintings and devoted himself almost entirely to sculpture, but he would revisit the medium later in life.

After the war, the return to sculpture by Ibram Lassaw also marked his departure from purely geometric shapes to biomorphic forms. He began integrating other materials, such as plastic and Plexiglas, and also adding dye to the sculpture to integrate color. In 1949, Ibram Lassaw became one of the founders of The Club, which was an informal but influential discussion forum of New York School artists that included Willem de Kooning and Franz Kline.

A breakthrough came for the artist in 1950. In a sculpture entitled Milky Way, Ibram Lassaw dripped melted plastic over a wire armature. Although neither aesthetically pleasing nor durable, Milky Way nonetheless marked the future direction of the sculptor. Following the direction of Milky Way, he welded rods into open-form architectonic structures, then encrusted the surfaces with droplets of metal. By using different alloys within the same piece, Ibram Lassaw achieved remarkable variations in color, which he also enhanced through chemical treatment. With a sculpture like The Hyades (1951) Ibram Lassaw found methods and materials that integrated biomorphic and geometric form while enabling him to work freely and intuitively.

By the early 1950s, Ibram Lassaw owned and used oxyacetylene welding equipment, and identified the ideal medium for his signature style of molten metal; creating a sculpture “drop by drop,” a method in which the red-hot metal, brought to varying degrees of temperature and consistency, was carefully directed through a funnel-like device. The resulting product was a kind of spontaneous and instinctive sculpture similar to the action painting of his New York School peers.

In 1951, Ibram Lassaw had his first solo exhibition at the Kootz Gallery. That same year, the artist sold his first major sculpture to Nelson Rockefeller, who eventually purchased ten more works, all of them pendants. Ibram Lassaw continued expanding his welding work, adding color by treating the metal with additives, and integrating minerals and semiprecious stones. With the assistance of gallery owner Samuel Kootz, who facilitated most of the commissions of Ibram Lassaw, the artist regularly showed works in group shows and enjoyed annual solo exhibitions at the Kootz Gallery right up until the gallery’s closing in 1966.
Ibram Lassaw once remarked that all artists have ancestors. In his own work, he claimed affinities with the sculpture of Julio Gonzalez, Naum Gabo, Antoine Pevsner, Vladimir Tatlin, Jacques Lipchitz, Joan Miro, and others. Unlike many of his fellow members of the American Abstract Artists, who deplored Surrealism as “formally backward,” Ibram Lassaw borrowed freely from Miro, especially during the mid-1930s.

In 1953, Ibram Lassaw created his first public commission Pillar of Fire for Congregation Beth-El in Springfield, Massachusetts. Other commissions to follow were a wall sculpture Clouds of Magellan (1953) for Philip Johnson’s Glass House, Pillar of Cloud (1954) for Temple Beth-El in Providence, Rhode Island, a monumental sculpture for the entrance of the New Arts Building at Washington University in St. Louis, Missouri (1959), and Elysian Fields (1963) for the New York Hilton Hotel. In 1954, Ibram Lassaw purchased land in The Springs, East Hampton, and moved there full-time with his wife in 1962. Other New York School artists such as de Kooning and Pollock frequently visited the area.

During the 1960s and 1970s, Ibram Lassaw taught at Duke University, University of California, Berkeley, Southampton College, and Mount Holyoke College. While sculpture was his primary art form, the artist also continued to produce lithographs, drawings on paper, photographs, “projection paintings,” and jewelry. By the mid-1990s, the eyesight of Ibram Lassaw had deteriorated to the point where he could no longer weld metals, but this did not stop him from working in other media. Ibram Lassaw remained in The Springs on Long Island and continued to work, even producing paper drawings right up to the late morning of his death.

Through his commitment to an intuitive construction of space and unconsciously driven application of melted metals, Ibram Lassaw developed an aesthetic similar to the instinctual painting compositions of his Abstract Expressionist peers, such as Jackson Pollock, who relied on a kind of trance-like automatism to structure their compositions.

Art critic Sam Hunter wrote of Ibram Lassaw “Few artists have made more personal and poetic statements in sculpture out of the collective impulse of abstract expressionism than Ibram Lassaw. Yet of the major figures who emerged during the heroic post-war years of the American avant-garde, he has maintained the most consistent theoretical basis for his art, drawing on such intellectual sources as Taoist and Zen teachings, the psychology of Jung, and other esoteric sources that generally throw light on non-rational mysteries and the creative potencies in man. The ideal calm which the personal presence of Ibram Lassaw radiates is an achieved and mastered serenity, which never fails to make a striking impression; in his daily life it is disrupted only by regular bouts of energetic creation, and by a continuous sense of astonishment and delight at the inexhaustible spectacle of the world, or more accurately the cosmos… his art has become a simulacrum of that revealed order and purpose, which he can argue in verbal discourse with an almost professional philosophical detachment.”