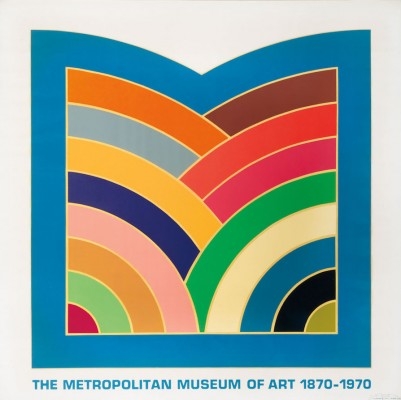 Frank Stella is one of America’s leading contemporary artists. Throughout his career he has pushed the limits of experimentation in painting, prints, and three-dimensional works, exploring, examining, and reexamining ways of seeing, interpreting, and understanding life. From the 1958 “Black Paintings,” through the shaped canvases, aluminum and copper paintings, and recent sculptural and architectural works, Stella has remained at the forefront of the contemporary art scene.

Born in Malden, Massachusetts in 1936, Stella moved to New York City in 1958 and has spent most of his life living and working in the city. The son of Italian immigrant parents, Stella attended Phillips Academy in Andover, Massachusetts. In the spring of his sophomore year he “discovered the art and music course,” where he first met Patrick Morgan, an abstract painter in charge of the art appreciation/studio classes. (1) In his student works from these years, Stella often imitated Morgan’s technique of laying on paint with a palette knife, scraping the pigments over boards that had been shellacked. Since materials were plentiful, as was studio space and time, Stella had the freedom to experiment endlessly. (2)

Stella entered Princeton University in 1954 and, while majoring in history, took numerous art history and studio art courses. Among his professors were noted art historian and former painter, William Seitz and painter Stephen Greene. Seitz was responsible for establishing the fledgling painting program at Princeton, which was not-for-credit at first. The program was quite small and among the other students was senior Darby Bannard (Walter Darby Bannard), who would also become a minimalist painter and from whose estate the present painting comes. Seitz also helped create the artist-in-residence program at Princeton in 1956 and brought in visiting artists such as Stephen Greene. Both Seitz and Greene were well connected with the vanguard New York art scene and during his years at Princeton, Stella accompanied them to exhibitions in Manhattan.

Under their tutelage, Stella was introduced to the inner circle of Abstract Expressionism and quickly became a convert. (3) He painted under the influence of artists such as Willem de Kooning, Helen Frankenthaler, and Franz Kline while at Princeton. In January 1958, Stella saw an exhibition of Jasper Johns “target” and “flag” paintings at Leo Castelli’s Gallery New York and was powerfully impressed by them. (4) In response to them, Stella embarked upon a language of his own, making paintings with “single or multiple box forms placed in varying contexts of bands or stripes. These pictures constitute the bridge, or transition, to the Black series” a series of paintings begun in 1958 that firmly established Stella’s reputation and his individual voice as an artist. (5)

Shortly after Stella graduated from Princeton he moved to Manhattan and quickly gained recognition in the New York art world. Moving further away from the paint-laden, gestural surfaces of abstract expressionist works and towards flatter surfaces and a more minimal color palette, Stella’s paintings reflected his statement of the time that a picture was “a flat surface with paint on it—nothing more.” Stella’s “Black Paintings,” made from 1958-1960, were early manifestations of this credo, in which he made austere paintings with bands of black paint separated by regular intervals of unpainted canvas. Several of these paintings were included in two groundbreaking exhibitions: “Three Young Americans” at the Allen Memorial Art Museum at Oberlin College in 1959 and “Sixteen Americans” at MoMA in 1959-1960. One of these paintings, “The Marriage of Reason and Squalor,” was purchased by Alfred Barr for the permanent collection of MoMA. In August of 1959, Stella became part of the stable of artists represented by the renowned gallerist Leo Castelli.

Not resting on his laurels, nor content to repeat himself, Stella soon experimented with new materials, techniques, and styles. In the 1960s, he used aluminum and copper paint and began making differently shaped canvases; not using the typical, and readily available, rectangular or square shapes. He also expanded his color palette and, in some works, arranged these colors in arcs and concentric circles. In the mid-1960s, Stella began using a new medium—prints—and worked with Kenneth Tyler at Gemini G.E.L. He designed the set and costumes for Merce Cunningham’s “Scramble” in 1967 and, in the 1970s, turned his hand to three-dimensional, collaged, relief art.

Freestanding sculptures followed which developed into elaborate, multimedia creations. His prints also combined various materials and techniques. In the 1980s and 1990s, the artist took as inspiration for his work literary sources such as Herman Melville’s “Moby Dick.” Since the late 1980s, Stella has been involved with several mural projects and large outdoor sculptural works. In addition, he received his first architectural commission—a band shell for the city of Miami, Florida, which opened in 2000—and has designed pavilions and museums.

Constantly evolving, changing, and responding to the world around him, Frank Stella is one of the most innovative and exciting living artists. He has won numerous awards, grants, and honors and has taught and lectured at universities and museums in America and abroad. He was given his first retrospective at MoMA in 1970, at the age of 33 and in 2007 The Metropolitan Museum of Art honored him with an exhibition.