Dorothy Dehner was an artist that explored many fields of art, including abstraction, cubism, painting, and sculpture. Her work draws upon a primitive nature with each line, color, and form emphasizing both a visual and symbolic isolation. Throughout her career, Dorothy Dehner had over 50 solo exhibitions and works included in permanent collections of major institutions like the Whitney, the Art Institute of Chicago, and the Metropolitan Museum of Art.

Dorothy Dehner was born on December 23, 1901 in Cleveland, OH. She learned painting from three aunts who were amateur artists. By 18, Dorothy Dehner lost her whole family. In 1915, she moved to Pasadena, California and majored in drama at the University of California, Los Angeles. She later moved to New York City to study acting at the American Academy of Dramatic Art.

In 1925, Dorothy Dehner traveled to Europe, where she saw Cubist and Fauvist paintings. Inspired by the art, she began taking sculpture classes at the Art Students League in New York City. Subsequently, the artist switched to painting because she felt sculpture was bound to traditional formula. At the same time, Dorothy Dehner met the young sculptor David Smith, whom she married in 1927.

The couple moved into a farmhouse at Bolton Landing, in upstate New York. During their marriage, Dorothy Dehner was helpful to Smith’s artistic growth. However, Smith did not reciprocate the same because he allegedly saw his wife as artistic competition. Dorothy Dehner still continued to pursue her art and exhibit it. The artist painted a series of idyllic scenes of her married life, which she collectively titled “Life on the Farm.” She also drew a series of ink drawings of demonic figures surrounded by vultures and bats, called “Damnation Series.” Years later, Dorothy Dehner realized that these drawings expressed the psychological discomfort she felt in the later years of her marriage. At the 1946 Audubon Artists exhibition, she won first prize in drawing. In 1952, Dorothy Dehner had her first one-person exhibition at the Rose Fried Gallery in New York City; the same year she divorced David Smith.

After leaving Bolton Landing, Dorothy Dehner moved back to New York City. She studied painting at Stanley William Hayter’s Atelier 17. The earliest sculptures of the artist were small, surrealist-influenced bronzes, which she cast using the lost-wax process. According to Dorothy Dehner, “I was never taught sculpture at all; nobody told me anything. I didn’t need it. The minute I had (the wax) in my hands, I knew what to do.” In 1957, she joined and participated in a three-artist show at the Willard Gallery in New York City, where the artist would exhibit through 1976.

From 1955 on, Dorothy Dehner worked primarily as a sculptor, using materials like bronze, wood, and Corten steel. In addition, the sculpture of Dorothy Dehner grew in scale. After the death of her second husband in 1974, she began creating wooden sculpture as high as ten feet. 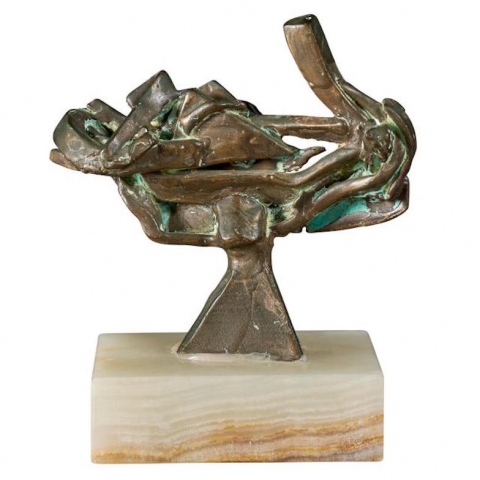