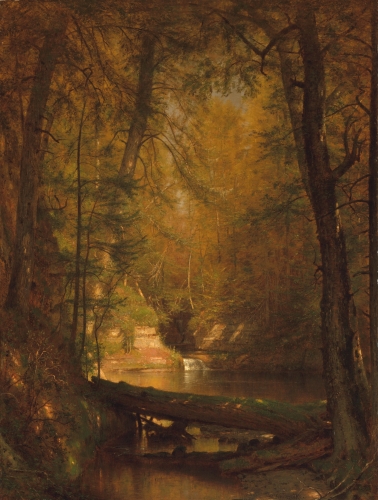 Born in a log cabin and raised on a farm near Springfield, Ohio, on the sparsely settled frontier, Worthington Whittredge was to later establish himself as one of the foremost painters of the Second Generation Hudson River School painters. His artwork incorporates the topographical style of the Hudson River School with the use of light and color typical of the French Barbizon School and Impressionism. His subjects include the Catskill Mountains in New York and the White Mountains in New Hampshire, in addition to the Great Plains of the American West.

Growing up as a trapper and hunter in Ohio, he had little formal art education. In 1837, at age 17, he went to Cincinnati to work with a brother-in-law, Almon Baldwin, who was a house and sign painter. Whittredge taught himself portrait and landscape painting, experimented briefly in Indianapolis with daguerreotypes, and then opened a portrait studio in Charlestown, West Virginia. However, after 1843, he focused on painting landscapes.

When he was in Cincinnati, he met many supporters of the arts including Nicholas Longworth, who became his patron and sent him to Europe. In 1849, Whittredge enrolled at the Royal Academy in Dusseldorf, Germany and spent five years there studying there with Carl Lessing and Andreas Achenbach. In Germany he developed an aesthetic that emphasized the meticulous recording of naturalistic details. The use of color and light in his landscapes is often referred to as a style that anticipated the forthcoming work of French Impressionists. He went on to spend another five years in Rome where he was part of the artists’ group that included Frederick Church and Nathaniel Hawthorne. He also visited Switzerland and Paris and was exposed to but rejected the Barbizon style of painting depicting peasant figures in landscape.

He returned to New York City in 1859, and, realizing his paintings of European landscapes were not well received, devoted himself to American landscape subjects, producing views of New York and New England. He became a typical Hudson River school painter, showing special skill with sunlight filtering through thick foliage and scenes of savage beauty and wondrous promise.

At this time, some parts of the population, unconvinced of mankind’s super eminence and skeptical of materialism, were proponents of the ‘romantic rebellion’, and tended to trust emotion and subjectivism over intellect and objectivism. Developing more contemplative frames of mind, they queried the mysteries of life, the universe, and God. In America the movement found a philosophical base through the eloquent writings of Ralph Waldo Emerson, Henry David Thoreau, and other transcendentalist thinkers. According to Whittredge, who had become a leading member of the ‘Hudson River School’, that designation was first coined by an unnamed critic for the New York Herald, who intended it as a barb on what was seen as the group’s provincialism. Other accounts hold that the term originated with Clarence Cook, a nineteenth-century critic for the New York Tribune.

Landscape had by this time evolved from subordinate backgrounds in history painting and some portraiture to an autonomous statement. The widespread acceptance of a romantic view of nature was significant, as it was believed that nature revealed its truth and beauty not to a limited few but to the mass of men. Nature in its own terms would come to symbolize, an American vast geophysical asset, the challenge and adventure of exploration, as well as the present and future of the nation, particularly appropriate for a country deficient in long historical traditions.

On the other hand, to the anti-urban, anti-industrial naturalist, landscape was the glorious demonstration of God’s handiwork and benevolence. Nature was God’s art. Characterizing landscape was of the highest worthiness for the artist’s consideration. Not surprisingly, in much writing of the period, the word nature is reverentially capitalized, as though proceeding from Deity just as certainly as the Son and Holy Spirit of the Trinity. Thus landscape was potentially more than mere topographical recording; it could be overlaid with moral and theological significance.

By the mid-nineteenth century, however, civilization had encroached considerably upon the eastern landscape, and Whittredge decided to journey westward with John Frederick Kensett and Sanford Robinson Gifford to Fort Kearny in Nebraska and then the Rockies to find new sources of inspiration.

In 1865-66, with Gifford and Kensett, he accompanied Major General John Pope from Fort Leavenworth, Kansas, up the south branch of the Platte River through Denver, then south along the eastern Rockies into New Mexico, where they met Kit Carson in Santa Fe.

If some were disenchanted with the desolate plains and prairies, Worthington Whittredge, on his journey with General Pope, was deeply moved by them: “I had never seen the plains or anything like them. They impressed me deeply. I cared more for them than for the mountains, and very few of my western pictures have been produced from sketches made in the mountains, but rather from those made on the plains with the mountains in the distance. Whoever crossed the plains at that period, not withstanding its herds of buffalo and flocks of antelope, its wild horses, deer and fleet rabbits, could hardly fail to be impressed with its vastness and silence and the appearance everywhere of an innocent, primitive existence.”

Whittredge made a total of three trips into the West but produced only about forty oil sketches and studio paintings based on Western subjects. Most were painted in his New York City studio from sketches made during his first journey to the West in 1866. A work in the Museum of Nebraska Art is, however, one on-site painting done along the South Platte River on his last trip in 1871.

In 1896, Whittredge took a sketching trip to Mexico with Hartford native Frederic Church, who had been one of the nation’s leading landscape painters.

The evolving and changing style of his landscape paintings reflect the variety and flux of American society at the time. He is numbered among the practitioners of luminism*, as his paintings contain a minutely executed tonal quality marked by intense illumination, expressing a mysterious, atmospheric silence.

Notable works include the Camp Meeting (1874; Metropolitan Museum) and Third Beach, Newport (Walker Art Center, Minneapolis). He also did a few still life as well as domestic interiors and exhibited his work at the National Academy of Design, where he served two terms as president. He also played a central role in the development of the Metropolitan Museum of Art in New York City. Around 1890, William Merrit Chase painted a portrait of Whittredge (‘Worthington Whittredge’).