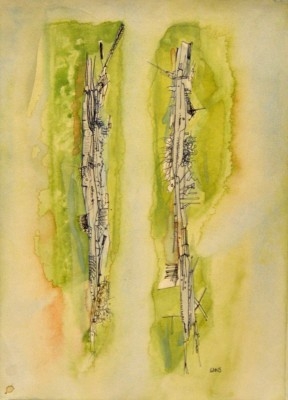 Wols was the pseudonym of Alfred Otto Wolfgang Schulze who was born into a wealthy family in 1913 in Berlin, Germany. His father was a distinguished lawyer, high ranking civil servant and patron of the arts who maintained friendships with many artists of the period including Otto Dix. In 1919, the family moved from Berlin to Dresden when his father was appointed head of the Saxon State Chancellery. During this period, Wols develops a love for music and takes up the violin. In 1924, he was given a still camera which along with the death of his father in 1929 became one of the defining moments of his life.

In 1927, he discovered his love of painting. Although Wols never had any formal artistic training, he found inspiration in the works of Otto Dix, George Grosz and Paul Klee. In 1930, he began an apprenticeship as a photographer with Genja Jones while attending classes at the Reiman-Schule, the Berlin School of Applied Arts.

In 1932, Wols studied anthropology under Leo Frobenius at the Institute of African Studies in Frankfurt. Then, he moved to Berlin where he briefly attended the Bauhaus Art School studying under Walter Gropius. Here he met Mies van der Rohe and Laszlo Moholy-Nagy. After only several weeks, lecturer and artist Laszlo Moholy-Nagy advised Wols to move to Paris. At the same time, director Fritz Busch offered the young prodigy Wols a position of concertmaster which is the first violinist or leader of musicians in the orchestra.

He chose to pursue his love of painting and moved to Paris, where he met many artists associated with the Surrealist movement. Working as a portrait photographer, draughtsman, illustrator and German teacher to support himself, Wols continued to develop his love of drawing and painting. The artist lived in Spain from 1933-1935, but returned to Paris after being imprisoned for political activities. At the age of 23 he had a one man exhibit at the Galerie de la Pleiade, one of the key Paris venues for contemporary photography. These photographs are sold under the name “Wols”. According to one account, he took the name from a torn fragment of a telegram he had received in order to assist in his career within the world of French avant-garde photography. In 1937, his photographs were shown in many of Paris’s most prestigious galleries. The new status of Wols as a recognized photographer was confirmed when he received his first large commission to photograph the Pavilion de l’Elegance at the Paris World’s Fair.

At the outbreak of World War II, he was interned as a German citizen and sent to an internment camp near Aix-en-Provence for 14 months. During this period, Wols concentrated on painting and ink drawings similar to those he started producing upon his arrival in Paris in 1932. In 1940, he was released and settled near Marseilles in Dieulefit and Cassis. Although he lived in poverty during his time in the South of France, with the help of Henri-Pierre Roche he was able to draw and paint in watercolor and sold several pieces. In 1942, an exhibition of watercolors by Wols was held at Betty Parsons Gallery in New York. Again he was forced to flee from the Germans in 1942 which landed him in Montelimar. He spent most of the war trying to emigrate to America, but this proved to be an unsuccessful and costly enterprise.

After World War II ended, Wols started to gain recognition. Upon his return to Paris in 1945, the artist had his first exhibition at the Galerie RenÃ© Drouin of the watercolors he painted while in hiding throughout the war. This first showing of his work was not very successful. In 1946, he started to paint in oils which resulted in some of his most important works. In 1947, a second exhibition at Galerie RenÃ© Drouin was a tremendous success. Wols earned the praise of artists such as Mireille Matthieu and critics such as Michel Tapie, who coined the term “Un Art Autre”.

Among his many friends and acquaintances in the artistic community of Paris were luminaries of the period such as Max Ernst, Fernand Leger, Alberto Giacometti, Jean Arp, Jacques Prevert, Simone de Beauvoir, Joan Miro, Alexander Calder, Tristan Tzara and Jean-Paul Sartre. These friendships sparked a keen interest in Existential philosophy which can be seen in his work. He became one of the pioneers of a move away from geometric abstraction towards a more painterly approach to art. Wols was one of the most influential artists of the Tachism movement (also known as Art Informal, Lyrical Abstraction and Matter Painting), which was the European counterpart of abstract expressionism in America. He produced a rich oeuvre which he refers to as ‘Zirkus Wols’. It was inspired by the Surrealist psychic automatism.

In addition, Wols was greatly influenced by the writings of the Chinese Daoist philosopher Laozi. The artist even wrote poems and aphorisms that expressed his aesthetic and philosophical ideas. The friendships of Wols with several well known writers of this period lead to a long series of book illustrations: Visages and Nourritures by Jean-Paul Sartre (1948); L’invite des morts by Franz Kafka (1948); Poemes chinois by Jean Paulhan (1948); Naturelles by Rene de Solier (1948); Baleine-ville by Camille Bryen (1949); and Le Theatre de Seraphin by Antonin Artaud (1950).

During his short life, Wols truly lived the life of a ‘starving artist’. In 1947, the artist fell ill and continued to work from bed throughout 1948 because he lacked the funds to go to the hospital. In June 1951, he moved to the country at Champigny-sur-Marne, south of Paris, to undergo treatment for alcoholism. During this time, he continued to produce fantastic ink and wash drawings.

Wols died in Paris in 1951 due to the effects of food poisoning which helped foster the legendary reputation that emerged after his untimely death.

In 1958, there was a large scale retrospective of his works at the Venice Biennale. Between 1955-1964 Wols works were displayed at the Kassel Documenta II – III. In the years since his death, Wols has become widely considered one of the most important modern artists.

Sources include:
A Dictionary of Twentieth-Century Art by Ian Chilvers
From a Fractured World to a Quest for Inhuman Purity – The Photography and Painting of Wols by Victoria Z. Alexander, EuroArt Magazine, Issue 13, Fall 2010
Grove Art Online