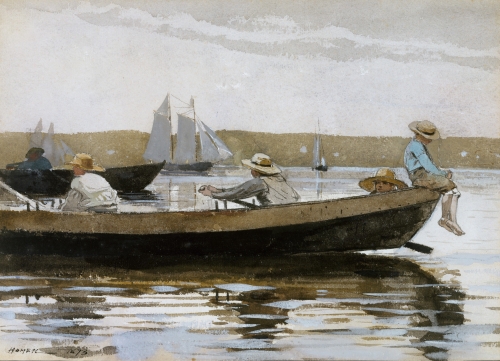 Winslow Homer was born in Boston, Massachusetts, in 1836, the second of three sons of Henrietta Benson and Charles Savage Homer. His father, a hardware importer, and his mother, an amateur watercolorist, encouraged his early interest in art. Given that no art schools and no art institutions existed in the Boston area during Homer’s youth, he, like many of his contemporaries, had to piece together his own artistic training. He began by working for the commercial lithographer John H. Bufford, an acquaintance of his father. In 1857, after two years as an apprentice to Bufford, Homer left the firm, rented a studio in the Ballou Publishing House in Boston, and launched his career as a freelance illustrator. He initially worked for Ballou’s Pictorial and Harper’s Weekly among other weekly magazines, and later illustrated various literary texts by celebrated authors, including the poets William Cullen Bryant, Henry Wadsworth Longfellow, and Alfred Lord Tennyson.

In 1859, Homer moved to New York, where he continued to freelance for Harper’s Weekly and other publications while establishing his reputation as a painter. Shortly after his arrival, he decided to further his artistic training: he enrolled in life drawing classes at the National Academy of Design and took a month of painting lessons from the French genre and landscape painter Frédéric Rondel (1826-1892). During the Civil War, he served as an artist-correspondent for Harper’s Weekly, visiting the front several times and illustrating the daily routine of camp life on the Union side. His wartime experiences inspired numerous oil paintings, and critical acclaim for this work led to his 1865 election to the National Academy of Design as a full academician.

Following the great success of his Civil War images, Homer took his first trip to Europe in December 1866. He spent ten months in France, sharing a studio in the Montmartre district of Paris with a friend from Massachusetts, Albert Warren Kelsey, and briefly visiting the countryside. During his stay abroad, he did not enroll in any art classes but worked on his own, completing nineteen small oil paintings and three illustrations for Harper’s Weekly. His works from this period display the influence not of contemporary, avant-garde French painters, such as Gustave Courbet and Edouard Manet, but of older, more traditional Barbizon School artists and Jean-François Millet.

After returning from France, Homer continued to work as a painter in New York and resumed his practice of painting in series, concentrating on depictions of women and children in outdoor settings. Despite his past triumphs, the new pictures received mixed reviews and sold for only modest prices. In the early 1870s, he began pushing his art and artistic practice in new directions. Most likely in response to a very successful exhibition of American and European watercolors at the National Academy of Design in February 1873, Homer first explored watercolor as a distinct means of artistic expression during a trip to Gloucester, Massachusetts, in the summer of 1873. He exhibited the works completed during this Gloucester visit at the American Society of Painters in Watercolors in the spring of 1874 and became a member of that organization three years later.

In addition to adopting watercolor as a primary form of expression, Homer altered his approach to art: he found inspiration in Japanese art, incorporating subtleties of design, such as asymmetrical pictorial arrangement and flat areas of color, into his work, and he embraced the Aesthetic Movement’s emphasis on beauty rather than meaning in a series of pictures portraying genteel, fashionably dressed women. These shifts in style and subject matter were accompanied by a new interest in decoration—Homer made two sets of tiles for fireplaces and became an active member of the Tile Club, decorating tiles at the meetings of this New York artists’ group.

In 1881, Homer traveled to England and settled in Cullercoats, a fishing village and artists’ colony near Newcastle, for almost two years. This experience had a profound effect on his art and life, and he undertook the subject of the human struggle with nature that would occupy him for the rest of his career. Working primarily in watercolor, he made numerous pictures of the local inhabitants, particularly the fisherwomen. Departing from his prior depictions of leisure class women and farm girls, he represented the women of Cullercoats in a monumental, heroic manner that conveyed a sense of strength and courage. In doing so, he changed his watercolor painting technique, both enlarging the size of his compositions and carefully planning them in his studio, often using preliminary studies.

In November 1882, Homer returned to New York City, but, a little more than a year later, frustrated by his financial situation, he retreated to Prout’s Neck, Maine, not far from Portland. He lived, mostly alone, on this rocky promontory, and built a studio overlooking the Atlantic Ocean. In this new setting, Homer’s subject matter shifted away from women and children to the sea, the wilderness, and the men who frequented such places. Many of his images involve references to the physical and spiritual power of nature—storm winds gusting, sunlight reflecting off the sea—and/or to mortality—hunters carrying their catch, fishermen answering calls of distress. In the mid-1880s, while painting his sea pictures, Homer made his first etchings. He etched eight plates between 1884 and 1889, seven of which were based on his sea paintings and his English watercolors.

Although Homer isolated himself in Maine, he continued to travel, sometimes accompanied by his father, to a wide variety of locales, including the Adirondacks, Canada, Bermuda, Florida, the Bahamas, and Cuba. Watercolor, portable and quick drying, became Homer’s preferred medium during these working vacations, and much of his later fame rests on these quickly rendered, impressionistic paintings. In 1890, Homer created the first in a series of pure seascapes at Prout’s Neck. These works, with their bold, dramatic portrayal of waves crashing against the rocky shore, became the most admired of his late oils.

The recipient of numerous awards and honors during his lifetime, Homer was widely regarded as one of the most important painters in the United States by the final decades of his career. Admiration for Homer’s work remains undiminished since his death in 1910, and his position in the top echelon of nineteenth-century American artists is secure.