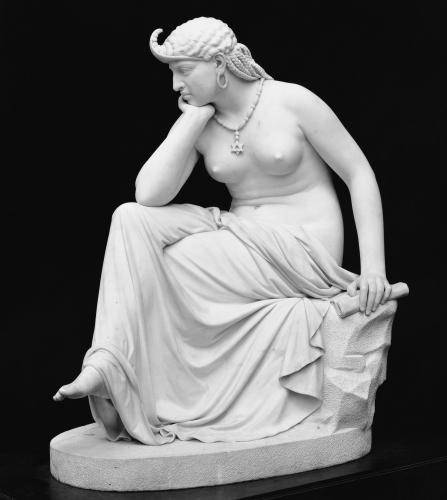 William Wetmore Story was a 19th-century sculptor known for idealized classical* subjects including Cleopatra, Lybian Sibyl and the Medea. He was the son of US Supreme Court Justice Joseph Story, and was born in Boston, Massachusetts in 1819, and educated at Harvard University. He had begun a successful career as a lawyer, writing several important books on the law when his father died in 1845.

A memorial statue of the famous jurist was planned, and at the younger Story’s request, the commission for it was granted to his son, although the younger Story was at best an amateur artist who continued to practice law after his father’s death. He traveled to Italy to prepare himself for the endeavor and worked on the model in Rome in 1848-49. In 1850, he returned to Boston and briefly practiced law, but decided to abandon that career to become a full-time sculptor. In 1851, he returned to Italy where he remained the rest of his life. The final work of his father was completed in 1853, and it is now in Cambridge’s Mount Auburn Cemetery.

In Rome, Story and his wife took apartments in the Palazzo Barberini. His circle of acquaintances included Robert and Elizabeth Barrett Browning, Nathaniel Hawthorne and William Makepeace Thackeray. Many of Story’s sculptures reflect his literary interests as a result of these associations. “Story’s artist fortunes began to change when his friend, Nathaniel Hawthorne used Cleopatra as the basis for the masterpiece of the sculptor-hero in the widely read Marble Faun (1860), which aroused interest in Story’s sculpture.” (Dimmick, 86) And his reputation was assured when Pope Piux IX sponsored the entry of Cleopatra and The Libyan into the London 1862 International Exhibition.

Unlike many other American sculptors, Story was not obliged to make portrait busts for a living. A rare example of such a work is Elizabeth Barrett Browning (1861, replica of 1866 in the Boston Athenaeum) made after the poet’s death, for her husband.