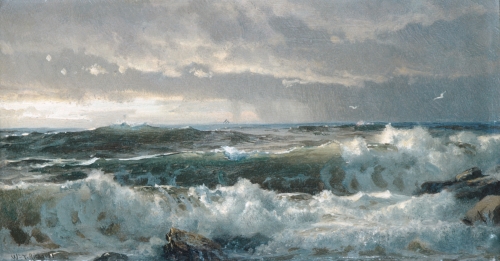 A native of Philadelphia, William Trost Richards had a fifty-year career as a noted landscape and marine painter whose mature work combined extremely detailed aspects of nature with atmospheric qualities. He was especially innovative for his time because he borrowed informal composition techniques from the Pre-Raphaelites of England, painting lights and colors outdoors as he actually observed them.

His formal education ended at age thirteen when he quit school to support his family by working as a commercial draughtsman designing ornamental metal fixtures. He studied painting privately with William Stanley Haseltine and Paul Weber from whom he learned a meticulous graphic technique. He was supported by local persons in Philadelphia who financed a year of study in Europe from 1855 to 1856, and in 1867, he went abroad for a second time. He did numerous pencil drawings and paintings of Italy and Switzerland and much painting along English coasts.

By the 1850s, he had decided that landscape was his favorite subject matter and was especially inspired by American poetry but was much more inspired by American landscape painting, especially that of John Kensett and Frederic Edwin Church. He did a series of brilliant Adirondack landscapes and also coastal landscapes and marine subjects from New Jersey to Maine. The latter part of his career, he was firmly established as a coastal and marine painter, ever fascinated by the tumultuous phenomenon of water hitting rocks and beach.

His works on paper–watercolor and pencil drawings–were some of his earliest and most important contributions, and hundreds of them survive in spite of an 1854 studio fire. Having been working in oil for some time, he began working in watercolor in the late 1860s, which was linked to his growing interest in the seashore.

Watercolor was best for plein air sketching and was excellent for expressing the atmospheric effects he sought to achieve. Two patrons of his watercolor painting were Elias L. Magoon and George Whitney, and their support allowed him to work without the worry of money.