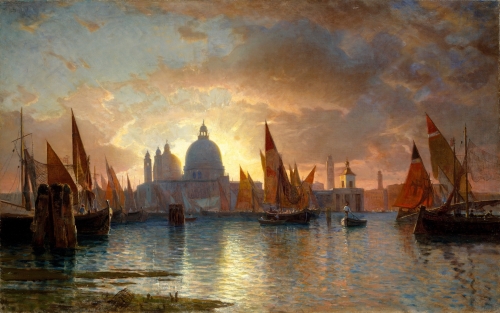 Born in Philadelphia to painter, Elizabeth Stanley Shinn Haseltine, William Haseltine became best known as a landscape and marine painter who had a special talent for conveying light and geological detail. He made a prestigious name for himself both in America and Europe.

His family, in addition to the mother, had other artist profession members including his brothers, James Henry Haseltine, sculptor; and Charles Field Haseltine, owner of the Haseltine Art Galleries in Philadelphia. William Haseltine’s son, Herbert, was also a sculptor and member of the National Academy of Design.

William Haseltine graduated from Harvard University in 1854, having studied art in Philadelphia in 1850-1851 with Paul Weber, German expatriate artist. Then Haseltine and Weber went to Dusseldorf where Haseltine enrolled in the Art Academy of Dusseldorf, and studied with Andreas Achenbach, who had been Paul Weber’s teacher. In 1856, he traveled and painted the Rhine River and went into the Italian Alps with Emanuel Leutze, Worthington Whittredge and Albert Bierstadt. Of Haseltine, it was said that he had a ‘life-long’ love affair with Italy.

By 1859, Haseltine was back in Philadelphia and had his first entry in the exhibition of the National Academy of Design in New York.

From 1858 to 1866, he lived and worked for much of his time in New York City where he had studio space in the Tenth Street Studio Building near studios of Leutze, Whittredge and Bierstadt. With special focus on rock formations, Haseltine did much painting of the American landscape including the coast of Rhode Island, Delaware River Valley and North Shore of Massachusetts. Some of his Academy exhibition entries from 1861 to 1865 focused on these areas.

After 1866, excepting four years, 1895 to 1899, he lived in Europe, and most of that time he had his studio in an Italian palazzo near Rome. There he specialized in Italian landscapes, many of them purchased by Americans. He also painted in Barbizon, showing a number of works at the Paris Salon. In 1869, he and his family moved to Rome, where they found permanent lodging in the Palazzo Alter, which he and his family “established as a social center for American expatriates and tourists in the city.” (Dearinger, 254)

From Rome, Haseltine traveled widely for subject matter including to the Tyrol, Bavaria, Sicily and Venice. It was written that “he visited most of the countries of Europe at one time or another.” (Dearinger, 254).

Although he was a dedicated expatriate, he also maintained ties in America. To New York he returned several times during the last three decades of his life, keeping a studio in that city in 1873 and 1874. He worked in Boston during the winter of 1896. With his son, Herbert, he traveled to Alaska and the American West in 1899.

Memberships included the Salmagundi Club, Century Association, American Academy of Rome and the Art Committee of the 1893 World’s Columbian Exposition in Chicago.

Upon William Haseltine’s death, about fifteen hundred paintings, drawings and watercolors were found at the Palazzo Alter, and they remained there for twenty years, eventually being inherited by his daughter, Helen Haseltine Plowden. In 1958, the National Academy of Design held a memorial exhibition of those works, and when returned, the collection, at the daughter’s request, was distributed to various public collections including the Dayton Art Institute, Nelson-Atkins Museum and Montclair Art Museum.

Sources:
David Dearinger, “William Stanley Haseltine”, Paintings and Sculpture in the Collection of the National Academy of Design, Volume One, 1826-1925
Matthew Baigell, Dictionary of American Art
Peter Hastings Falk, Editor, Who Was Who in American Art