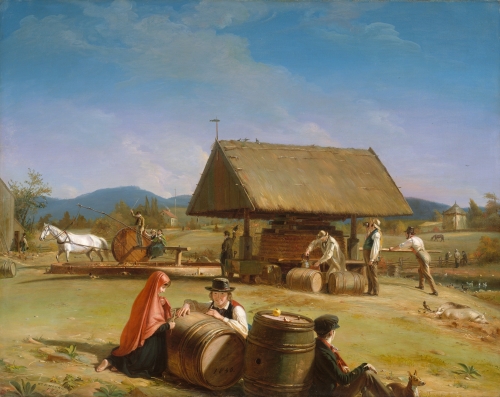 Born on a farm in Setauket, Long Island, William Mount became what art historian Matthew Baigell described as the “foremost American genre painter.” When other artists were trying to copy European academic subjects of history, religion, and literature, he stayed in America and focused on the daily lives of East Coast people.

Many of his paintings expressed moralistic and political views, and he was also the first major American artists to portray black people with dignity although he opposed abolition of slavery. Because of his humble subject matter and skillful realistic execution, he was well received by an American public of the era of Jacksonian democracy. His serene agrarian paintings were also a welcome contrast to the increasing complexities of the Industrial Revolution.

He had a long-time studio at Stony Brook on Long Island, and many years later a local man, Ward Melville, established a collection honoring Mount, the first significant American-born painter to devote most of his profession to genre painting.

He was raised on the Setauket farm, and when his father died, Mount, age 7, was sent to live with relatives. He served an apprenticeship in his brother’s sign painting shop in New York City. He studied engraving, and in 1826, was one of the first students of drawing at the National Academy where his primary subject was history painting. But the next year, ill health caused him to return to Setauket where from 1830, he spent the remainder of his life doing genre paintings of his contemporaries. However, his portrait painting became his earliest livelihood, and he also did local landscapes as well as still lifes.

As a genre painter, he did numerous scenes of everyday and commonplace life, skillfully executed with meticulous detail and painstaking glazing. The focus of his work was the “American-ness of the new country’s culture” (American Art Review 12/98).

Although he never traveled to Europe, he became the first American painter to be known widely there because his lithography pieces, thanks to New Yorker William Schaus who worked with a European dealer, were circulated throughout Europe. Part of their popularity was the fact that blacks and their place in American society were included as subjects, reflecting the racial tensions of the late 1850s and 1860s.

He died suddenly in 1868, an artist appreciated by his contemporaries for the timeliness of his subject matter but lauded by later generations for the clarity and precise execution of his canvases.

A special exhibition curated by Deborah Johnson and titled William Sidney Mount: Painter of American Life, was held in 1999 and organized by the Museums at Stony Brook, New York, and the American Federation of Arts.