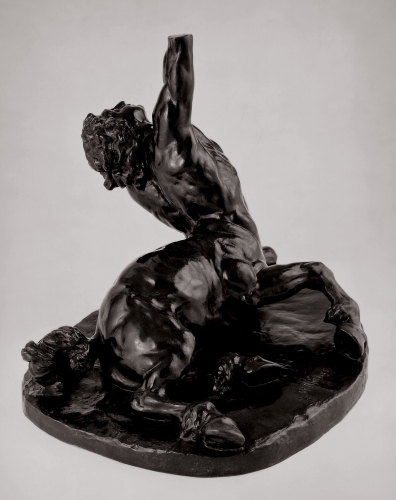 A gifted painter and sculptor his reputation faded, largely because his style, which combined Realism, Luminism and modified Expressionism, did not conform to the Neo-Classical preferences of his era. His sculpture talent was for “original, expressive and anatomically- sophisticated bronzes” (Zellman, 171).

William Rimmer was born in Liverpool, England to a mentally unstable father who thought he was the lost heir to the French throne. The father worked as a cobbler, supporting the family, which, in spite of the father’s mental problems, had a cultured environment encouraging of young Rimmer’s talents.

In 1818, when Rimmer was age two, the family emigrated to Nova Scotia, and then to Boston in 1825. By age 15, he was employed as a sign painter, lithographer, soap maker, and shoe cobbler, and in his spare time did carving, first using gypsum in a style best described as Expressionism. “Perhaps a metaphor for his father’s tormented life, this sculpture, Seated Man, was probably the first nude figure carved in the United States.” (Dimmick, 50) It is in the Museum of Fine Arts, Boston. He also did oil painting of religious subjects for local Catholic churches.

In the early 1840s, he traveled as an itinerant portrait painter and became interested in medicine, influenced by his friendship with Dr. Abel Kingman, affiliated with the Massachusetts Medical College. Rimmer tutored himself in the Kingman Library and took classes at the College in anatomy. About 1848, he began treating patients, setting up a practice between 1855 and 1863 in East Milford, Massachusetts. In the late 1850s, he applied his knowledge of anatomy to sculpting, first in granite and then in bronze, but, as stated above he disregarded the popular style of his time, and by 1864, had only one public commission, the head of Alexander Hamilton. It was erected on Commonwealth Avenue in Boston.

During this period, he completed Head of a Woman, which is in the Corcoran Gallery of Art; Saint Stephen, in the collection of the Art Institute of Chicago; and a full-size figure, The Falling Gladiator, in the Metropolitan Museum of Art. He did three nude statues, with Greek mythology themes. A wealthy Boston patron, Stephen Perkins, tried to promote Rimmer’s sculpture in Paris and Florence, but only minimal interest was elicited.

Rimmer’s oil paintings included Civil War scenes and exotic Romanticism inspired by William Blake, English writer and artist, whose linearity and symbolic energy reflected the writing of Dante. During the 1850s, Rimmer was in contact and much influenced by the Emersons and Alcotts, exponents of Transendentalism –the belief in nature as symbolic of the divine.

In 1861, Rimmer abandoned his medical practice, and began giving anatomy lessons in Boston, and best-known for his chalk talks, lectured widely on the subject including at Lowell Institute, National Academy of Design, and Harvard University. One of his students was Daniel Chester French, who became much renowned as a sculptor. From 1866 to 1870, Rimmer was Director of the School of Design for Women at the Cooper Union, and from there had an “unhappy departure”, likely related to what is described as his “cantankerous personality” (Dimmick, 50)

Rimmer wrote two books on anatomy and art, The Elements of Design (1864) and Art Anatomy (1877), illustrated with 900 of his drawings.

He died in South Milford, Massachusetts.