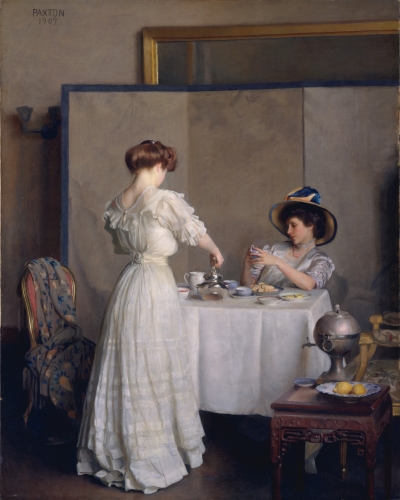 In Philadelphia where he lived briefly, he received so many commissions for portrait paintings that he was referred to as the “court painter of Philadelphia.” Portrait subjects included Presidents Calvin Coolidge and Grover Cleveland.

In addition to his canvas painting, Paxton was a muralist whose work was at the Army and Navy Club of New York City and St. Botolph’s Club of Boston. He was also a lithographer, and etcher, and his studios were in Boston, East Gloucester, and Provincetown. In 1928, he became a full member of the National Academy of Design.

Paxton studied in Boston with Dennis Miller Bunker at the Cowles School, and then in Paris at the Ecole des Beaux-Arts with Jean Leon Gerome, the teacher of Bunker, and a life-long influence on Paxton’s skill with figures. In 1893, Paxton returned to Boston from Paris and studied at the Cowles School with Joseph De Camp, a new faculty member who had much influence on Paxton in the execution of what became his signature interiors: Vermeer-like scenes of well-to-do persons in elegant, quiet settings.

In 1904, a fire in the Harcourt Building in Boston that housed Paxton’s studio destroyed about 100 of his paintings as well as many canvases of Joseph De Camp.

William Paxton died in Boston in 1941.