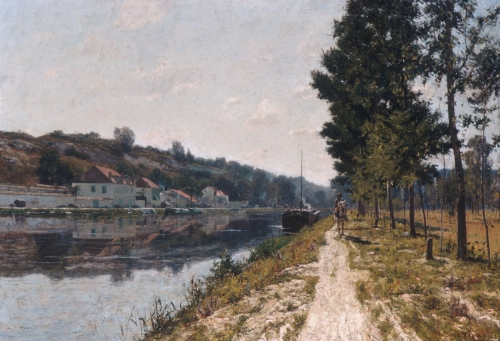 William Picknell painted in a ‘plein-air’ style, usually capturing brilliant light and clear air in his works. This ‘glaring’ light technique characterized his works from nature and placed him in the forefront of outdoor landscape painting. He was also noted for his ample application of paint, a characteristic of many Impressionists. Picknell also became legendary for the rapidity in which he painted. He was a realist, a master figure painter, and often portrayed Portuguese and Yankee fishermen at work along the New England coastline.

William Picknell was born in Vermont in 1853, and lived with relatives in Boston after becoming orphaned at age 14. His family discouraged his pursuit of art as a career, but he continued to greatly admire the work of George Inness, an influential and highly regarded painter. Inness was in Italy at the time, and a relenting uncle provided a one-time $1000 stipend for Picknell to join Inness there. Two years later, Picknell attended the Ecole des Beaux-Arts* and then moved to a small village, Pont Aven, along the Brittany coast. There, an assembly of international artists had established a colony. In 1876, Picknell exhibited in the Paris Salon. His painting, The Road to Concarneau, was awarded an honorable mention, which solidified his future as an artist. He soon exhibited successfully in England and departed with no unsold inventory.

In the 1880s, he returned to the Massachusetts coast and opened a studio where he could paint at little expense and be near many of his Brittany friends. Later, Picknell traveled extensively in the United States.

In 1889, he married and returned to France, where he continued to paint. In 1897, Picknell’s poor health and loss of his only child resulted in his return to Boston, where he died at age 43.

Picknell was elected to the Society of American Artists in 1880, the Society of British Artists in 1884, and in 1891, became an associate member to the National Academy of Design. His works can be seen at the Metropolitan Museum of Art in New York City, the Museum of Fine Arts in Boston, the National Collection, Musees de France, and at the Walker Art Gallery in Liverpool, England.