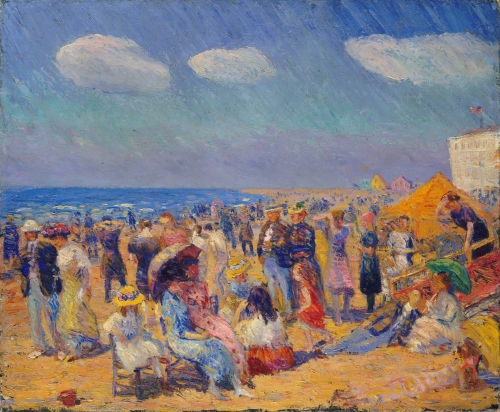 Born in Philadelphia, William Glackens became an Impressionist painter who modified the style by retaining delineation of figures. But early in his career, he was an active Social Realist when the ‘Ash Can’ approach to painting was being promoted by Glackens’ good friend, Robert Henri. However, Glackens eschewed subjects of the seamier side of society and adopted more refined depictions such as upper class persons strolling in parks, sitting in cafes, and studio posed still lifes and figures. Of Glackens’ inclination to distance himself from less-than-pleasant subjects, art historian Matthew Baigell wrote: “Of all the realists around Henri, Glackens was perhaps least attracted to the life of the streets, preferring scenes of middle-class activities in parks, in the theater, at shopping, or on vacation.” (136).

He also did many paintings of seaside resorts on Cape Cod and Long Island, particularly Bellport where he and his family spent summers. Surprising to many of his associates was the fact that even though he had much exposure in Europe to avant-garde thinking, he expressed little interest in the modernist art movements that followed Impressionism and that took such hold among his peers.

Glackens graduated from Philadelphia’s Central High School with John Sloan, and in 1891 became an artist-reporter for the “Philadelphia Record.” He did the same kind of work from 1892 to 1895 for the “Philadelphia Press”. He studied briefly at the Pennsylvania Academy with Thomas Anshutz, and there formed a strong bond of friendship with John Sloan, George Luks, Everett Shinn and Robert Henri and then shared a studio and traveled in Europe with Henri. He spent a year in Paris where he painted many scenes of life in the parks and cafes.

Glackens settled in New York, worked as an illustrator, and in 1898, went to Cuba as an artist-reporter for “McClure’s” magazine of the Spanish-American War. He became part of “The Eight,” a landmark exhibition of urban realists, led by Henri, at the Macbeth Galleries.

In 1912, he went on an extensive art-buying trip in Europe for Albert Barnes, a friend from high school who had amassed a fortune from an antiseptic gargle solution. Barnes built a huge home and museum in Merion, a suburb of Philadelphia, and established the Barnes Museum. The many works of Renoir, Degas, Van Gogh and Cezanne that Glackens purchased for Barnes became the center of the Museum collection. This project also firmed Glackens’ interest in the Impressionists, especially Renoir from whom he adopted “soft, feathery brush-work and rich, variegated colorism, with emphasis on sift pinks, yellows and greens”…(Gerdts 281)