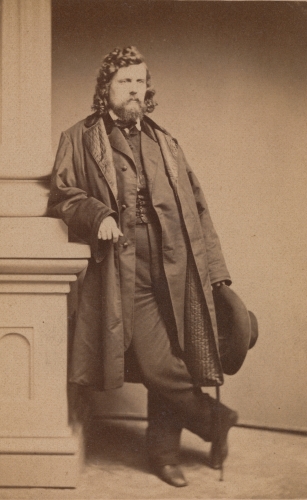 Early in his career, he was basically self-taught although he painted with his older brother, James Henry Beard. In 1845, he set up a studio in New York City, joining his brother, but his portrait skills did not earn him much money or attention. Five years later he moved to Buffalo, hoping to find more success, but he was disappointed.

From 1856 to 1858, having saved enough money to travel, he went to Europe. In Dusseldorf, Germany, he met and painted with many American artists including Emanuel Leutze, Sanford Gifford, Worthington Whittredge, and Albert Bierstadt. He also toured Switzerland and then returned to America where he again settled in New York City and took a residence studio at the Tenth Street Studio Building.

In 1866, he traveled West by train, and in Colorado his companion was Bayard Taylor, a writer and lecturer. Beard wrote to his wife, the daughter of New York portraitist Thomas le Clear, that he thought the landscape was monotonous, was disappointed he didn’t see more buffalo, and was unhappy with wild life and hardship living. As a result, he turned more and more to his imagination, retaining an interest in wildlife but not in studying their habits and environment first hand. Many of his paintings showed animals, especially bears, as realistic physically but atypical in their behavior.

William Beard was elected an Associate member of the National Academy of Design in 1861, and a full member in 1862. He served on the Academy Council from 1873 to 1875. He is generally regarded as a better artist than his brother, James Beard, but both were successful during their life times.

Sources:
Jonathan P. Harding, Essay, Paintings and Sculpture in the Collection of the National Academy of Design, Volume 1, 1826-1925. David Dearinger, General Editor
Peter Hastings Falk, Editor, Who Was Who in American Art