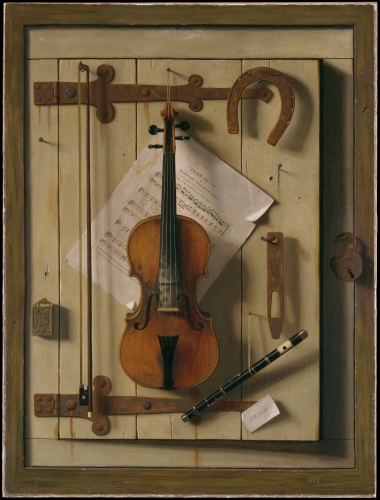 Born in Clonakilty, Ireland, William Harnett became America’s best known “trompe l’oeil” [fool the eye] still-life painter in the later part of the 19th century and is credited with being the most influential in that style and subject matter. Collectors of this artist need to have a watchful ‘eye’ because of the many forgeries of Harnett’s work. Likely his most famous painting is After the Hunt, in the collection of The California Palace of the Legion of Honor.

For nearly 50 years after his death, his work was overlooked, but in 1939 an exhibition held by Edith Halpert at her Downtown Gallery in Greenwich Village, New York initiated the public attention that has continued to grow into the 21st century. Halpert first saw Harnett’s work in 1935, when one of his canvases, The Faithful Colt, was brought to her attention. It was dated 1892, the year of Harnett’s death, and depicted the special fondness an owner had to his Colt gun. Astutely, Halpert negotiated a sale of the painting for $300.00 for the Wadsworth Atheneum Museum in Hartford, Connecticut, a city that had the headquarters of the Colt Firearms Manufacturing Company. The Colt family had donated a wing to the Museum, and Harnett’s painting, of course, fit into the art collection. Pumped financially over this success and much intriqued by the unique methods of the artist, Halpert put out the word she wanted more Harnetts.

By 1939 she had over 12 of his paintings in her possession, and then contacted many influential persons such as Alfred Barr, Director of the Museum of Modern Art; Henry McBride, New York Times art critic; Trustees of the Nelson Gallery in Kansas City and of the Smith College Museum in Northampton, Massachusetts. Collector Nelson Rockefeller purchased three works for the Museum of Modern Art and another for Conger Goodyear, as a retirement gift for serving as MOMA’s Chairman of the Board. All of these purchases were made from the highly successful exhibition Halpert staged in April 1939.

However, the event, which she later described as her Depression-era savior, the ‘ultimate sugar daddy’ that ‘stabilized her gallery balance sheet’, was held with virtually no information about the artist. “Harnett appeared to have been completely forgotten—no recent books, no articles or scholars had analyzed his extraordinary talent for still life, which rivaled the great Dutch still life painters of the seventeenth century.” (Pollock 215) But thanks to this inital special interest, promotion and research of Edith Halpert and the ensuing five-museum tour of her 1939 gallery show, the name of William Harnett was on the ‘road’ to having a strong place in American art history. Another boost for Halpert ‘balance sheet’ and for Harnett’s reputation, came in December 1939, with the purchase from her for $4000.00 of Harnett’s last painting, Old Models, to the Museum of Fine Arts in Boston. The work, completed just before his death, had a musical theme as well as some other still-life objects and was large, 4 feet by 2.5 feet, the largest Halpert had ever seen.

Since that introduction of Harnett’s work into the New York art world, much has been learned about the artist and significantly more of his paintings have been located. Many of his works are hanging-game still lifes, but he also painted images of antiques, newspapers, mugs and pipes. His career lasted only 18 years, 1874 to his death in 1892, and is divided into three periods: 1874 to 1880 when he began to paint in oil; 1880 to 1886 when he was in Munich, Germany; and 1886 to 1892 when he lived in New York.

He moved to Philadelphia with his family as an infant. His family were artisans. He was first trained as an engraver of silverware and worked in this occupation from 1865 to 1875 before devoting himself exclusively to still-life painting. Likely this training as an engraver contributed to the precision and care he took in the details of his paintings.

Harnett attended the Pennsylvania Academy of Fine Arts, and in 1871 moved to New York where he studied at the National Academy of Design and the Cooper Union Institute while working as an engraver of table silver. In 1876, he returned to Philadelphia and became closely associated with John Frederick Peto, who was painting in the same trompe l’oeil style. Harnett’s early works before 1880 were mostly cluttered still life in the tradition of Philadelphian, Raphael Peale.

From 1880 to 1885, Harnett traveled in Europe, studied at the Munich Academy, and painted relatively small paintings. There, painting precise still lifes, he was disdained as old fashioned by many critics who were getting much more interested in bold colors and looser styles of painting. He went to Paris where he got a warmer reception and exhibited hanging-game still lifes at the Salon des Beaux Arts.

He returned to the United States until 1886, and then lived and worked in New York until his death. He had long periods of illness and hospitalization before his premature death in 1892 at age 44. That year, he went to Arkansas to get relief through the hot springs for his poor health. In October, he was found in a coma outside his New York City studio at 40 West 30th Street, and he died two days later in a hospital. He left no will and only five paintings including Old Models, and $500.00 in cash.

He likely produced about five-hundred paintings, but many of these have been lost; also many paintings attributed to him are forgeries including some painted by Peto whose reputation was not as strong as Harnett’s.