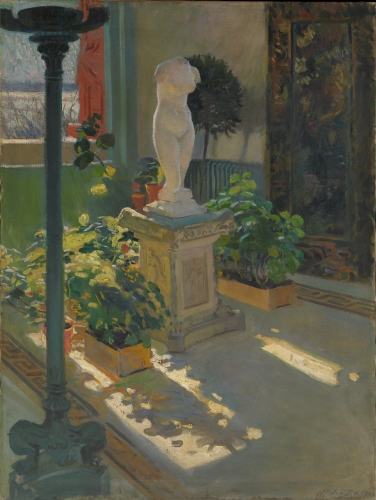 William de Leftwich Dodge was born in Liberty (now Bedford), Virginia, to William Miner Dodge, an insurance agent from New York, and his wife, Mary (Mamie) Lucinda Leftwich Dodge. Mamie Dodge, an eccentric scion of an old Virginia line, took her three young children and moved to Europe to pursue her artistic aspirations, leaving her erstwhile husband behind never to be reunited with his family. The Dodges initially moved about, living in Munich and Berlin before settling in Paris.

Having shown prodigious innate skill, young William began drawing classes at that city’s Colarossi Academy in preparation for taking the entrance exam for the venerable École des Beaux-Arts. Admission standards were quite stringent, and it took Dodge three years and six attempts before he was finally admitted in 1885.

Dodge’s first monumental painting, The Death of Minnehaha, based on William Wadsworth Longfellow’s poem The Song of Hiawatha, received critical acclaim when it was awarded a gold medal at the Prize Fund Exhibition in New York in 1887. The following year, another ambitious work, David and Goliath, was shown at the Paris Salon, where Dodge would continue to exhibit throughout his tenure in France.

Dodge returned to America in 1889, taking studio space with George Bridgman at 6 West 14th Street in New York. His recent successes led to paintings being accepted in 1890 at both the National Academy of Design and the American Art Association. He also made illustrations for popular magazines, including Collier’s, Scribner’s, and the Century.

In 1891, Dodge traveled to Chicago in search of work at the building site of the World’s Columbian Exposition, scheduled to open in 1893. After serving as an assistant on a mural depicting the Great Chicago Fire, he returned to New York. Upon hearing that one commission for the fair remained—a dome mural in the Exposition’s huge administration building—Dodge audaciously entered the offices of architect Richard Morris Hunt to apply for the job. His project funds nearly depleted, Hunt relented and gave Dodge the commission for three thousand dollars, “hardly enough to pay for the paint.”

This work launched Dodge’s career as one of the premier muralists of his day. In the following years, he received commissions to paint murals for the Library of Congress, (Ambition, 1896), the King Edward Hotel in Toronto, Canada (The History of Canada, 1903), and the 1915 Panama-Pacific Exposition in San Francisco, among others.

Such notable assignments, combined with portrait commissions and the sale of studio work at important venues such as the Paris Salon, the Pennsylvania Academy of the Fine Arts, and the Art Institute of Chicago, afforded Dodge a rather grand lifestyle.

In 1897, he married Frances Bland Pryor with whom he was to have two children. The family divided their time between trips to Paris and Giverny, an apartment on New York’s Park Avenue, and an elaborate summer house at Setauket, Long Island. The artist reveled in the social swirl of New York City during the Jazz Age, creating original costumes for exclusive galas. He also taught, serving on the faculties of both the Art Students League and the Cooper Union.

Between 1900 and 1910, Dodge made multiple visits to the coastal Georgia area just south of Savannah. The saltwater marshes and deciduous woods that surrounded his host’s home—the lavish Lorillard-Livingston mansion in Harris Neck—provided endless subject matter for plein air landscapes.

Dodge’s mural work was physically taxing and in the years after World War I, he began to slow down, often “taken desperately ill from overwork.” In the 1920s and 1930s, he made several restorative trips to Italy, Mexico, and the American Southwest.

Dodge’s final entry to the Paris Salon, Madonna of the Oleanders, was exhibited in 1934; today his work is represented in major American museums, including the Metropolitan Museum of Art, Smithsonian American Art Museum, and the National Portrait Gallery.

At his death, Dodge’s longtime friend—the sculptor Frederick MacMonnies, whom he had first met when both were fledgling artists in Paris—wrote that Dodge was the “salt of the earth as a man, a friend and an artist—a real genius in his way but withal so human and entertaining.”