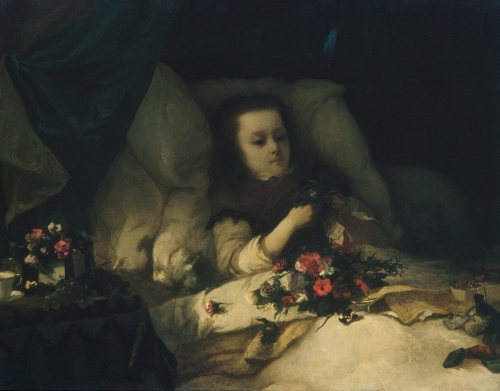 A marine painter, well-known in the United States and France, he was a life-long friend of John Singer Sargent.

Born in Boston, Massachusetts in 1933, he went to sea at an early age, but settled in Paris, France after a few years, where he then lived for over 30 years. Dana studied art in Paris at the Ecole de Beaux Arts under Le Poittevin and Couture, and became a regular exhibitor at the Annual Salon, where his pictures were ‘Hors Concours’. His seascape ‘Solitude’ showing a deserted waste of the great waters of the Atlantic under a moonlit sky won a gold medal for the year at the Paris International Exhibition of 1878, and several of his pictures may be seen in the Metropolitan Museum in New York and other galleries in the states.

In 1855 he married a daughter of Colonel James B. Murray of New York, and they had two daughters and a son. He later moved to London, England, where due to ill health, Dana did not exhibit but continue to sketch and paint well into old age.

He had been elected to the National Academy of Design in 1862, and when he died in London in 1927, at age 95, he was the oldest surviving member of the Academy.