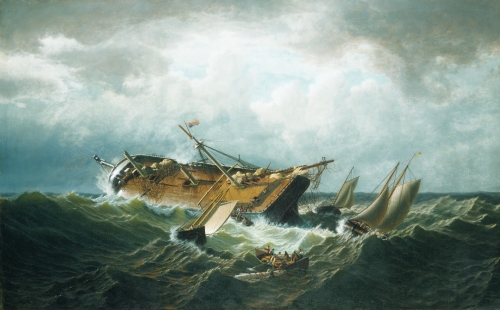 A 19th-century marine painter, William Bradford is famous for his seascapes that reflect his background of being raised in an area known for whaling and other marine activities. During much of his career, his work focused on the Arctic region, which he depicted with strong color and spectacular lighting.

Bradford was born and raised in New Bedford, Massachusetts to Quaker parents who disapproved of his desire for a painting career. He became a clerk in his father’s dry goods shop in New Bedford but devoted his spare time to sketching, a diversion that caused him and his wife to lose a farm that had been given to them by his father-in- law.

In the early 1850s, living in Fairhaven, he launched his professional career by selling portraits of ships for twenty-five dollars a piece. In 1854, he opened a studio and about this same time attracted the interest of Albert Van Beest, a Dutch painter who had come to America in 1845. He became Bradford’s teacher and collaborator, and until his death in 1860, they painted together local scenes including seascapes and whaling pictures.

In 1861, Bradford began a series of trips to Nova Scotia, Labrador, and Greenland, and painting and photographing the Arctic region became a consuming interest. He also published a book in London titled The Arctic Region, which he vividly illustrated with photographs pasted onto the page and he gave lectures accompanied by lantern slides of his paintings. In the early 1880s, he lectured on the Arctic in England and received a commission for painting Queen Victoria.

In the 1870s, he established a studio in San Francisco, and traveled extensively in the western United States where he painted Yosemite, Mariposa Valley, and the mountains of the Sierra Nevada. He often traveled and painted with Albert Bierstadt, his fellow New Bedford artist.

Bradford developed a technique of painting from his many photographs, but he only used them as tools and not as something to copy. He felt strongly that an artist should never copy nature exactly but should rework the subject matter through one’s mind and creative hand.

He highlighted his marine vessels with atmospheric tones, expressive cloud formations, and gradations of light including ripples on the water. He delineated the details of the ships and by showing distant views of shorelines, suggested panoramic perspective. His style was more realistic than impressionistic and his composition was strong and clear.