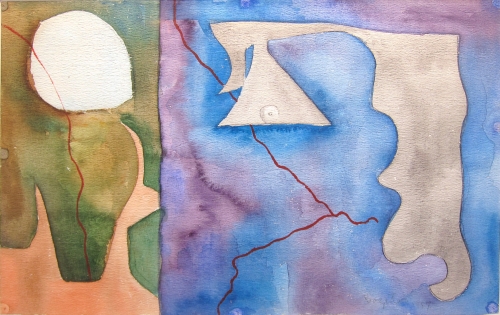 He worked briefly for a newspaper and in a stained-glass factory where his friends encouraged his art talent. William Baziotes moved to New York City in 1933 and studied for the next three years at the National Academy of Design, primarily with Leon Kroll. From 1936 to 1941, he was a WPA artist, working as a teacher and in the Easel Painting Division. In the early 1940s, William Baziotes came under the influence of European Surrealists who were expatriates in New York, and he also experimented with Automatism. William Baziotes was also close to Robert Motherwell and Mark Rothko, with whom he founded the Subjects of the Artists School in 1948. The previous year, he became “the first Abstract Expressionist to gain wide attention when he won a prize” at an exhibition at the Chicago Art Institute of abstract and surrealist art.

The signature works of William Baziotes became biomorphic and amoebic forms against Cubist grids. Although his paintings appears to have some overall organization, William Baziotes said that he did not begin his paintings with a plan but that he painted intuitively. . .”the act of doing it becomes the experience.”