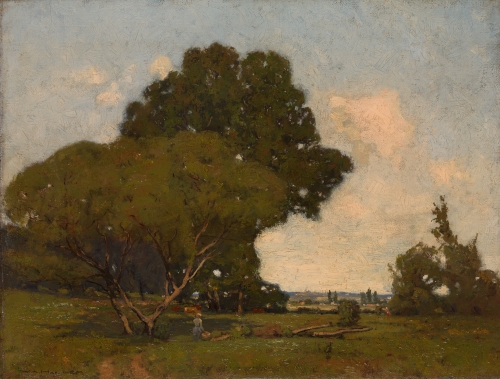 A sculptor and painter, William Harper was the “first African-American artist to achieve significant critical success at the Art Institute of Chicago’s annual juried exhibition.” (Kennedy 119). Chicago newspapers provided much coverage of this event, describing his career as “meteoric” when in 1905, he won a blue ribbon from the Municipal Art League for their exhibition at the Institute. Tragically, Harper died in Mexico City at age thirty six from tuberculosis, and a memorial exhibition of sixty of his works was held at the Art Institute.

Harper began studies at the Art Institute in 1895, paying his enrollment by working as a janitor and night watchman. He graduated in 1901 and then went to France where from 1903 to 1905, he studied at the Academie Julian. He also painted in the French countryside with William Wendt and Charles Francis Browne.

In 1907 and 1908, he was again in France and studied with African-American painter Henry Ossawa Tanner, who was an American expatriate and very selective about his students. From Tanner, it is thought that Harper learned to use heavy impasto. However light and atmosphere in many of his paintings show influence of the Barbizon School painters such as Henri Rousseau and Constant Tryon.

Harper was a member of the Chicago Society of Artists and the Western Art Association.

Sources include:
Elizabeth Kennedy, “Chicago Modern 1993-1945″
Peter Falk, “Who Was Who in American Art”