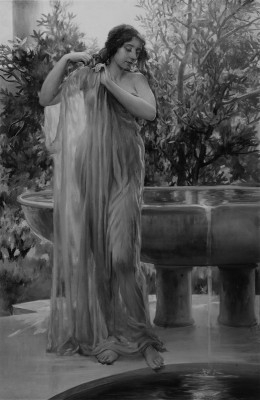 Will Hicok Low, born in Albany, New York, in 1853, was a leading muralist and figurative painter who explored both Barbizon landscape and a colorful Victorian style. He studied with academic painter Jean-Leon Gerome from 1872-1877, in Paris, France. He was the second husband of artist Mary MacMonnies Low, and a friend of writer Robert Louis Stevenson. He was a member of the National Academy of Design, New York City, elected an Associate in 1888, and an Academician in 1890. He exhibited at the National Academy for 60 years.

In March 1901, Will Low wrote an article for International Quarterly, “National Expression in American Art,” in which, defending the achievements of American painters of the day versus the Europeans, he sought to tie American art to the great traditions of the past, that were being carried forward in the America of his day. American artists were “another link in the long chain which brings from Greece through Italy and France to the shore of our western hemisphere.” He also wrote art criticism for Scribner’s, McClure’s and Century.

Will Hicok Low died in Bronxville, New York in 1932.

Laura L. Meixner, in 1985, wrote “Will Hicok Low (18531932): His Early Career and Barbizon Experience”, in Volume 17, Number 4 of the American Art Journal, published by the Kennedy Galleries, New York City.

Sources:
Peter Falk, “Who Was Who in American Art”