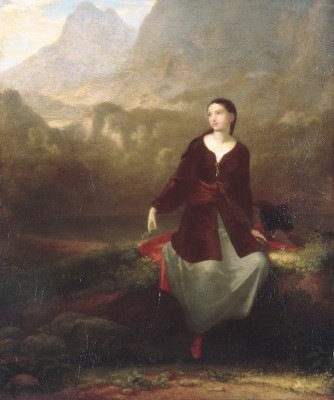 Achieving an international reputation as a romantic painter, poet and art philosopher, Washington Allston did historical, portrait and historical painting in a dark, wild, mystical, lofty style. His many years spent abroad became a major influence for American artists to study in Europe. He also affected the changing image of United States artists from being slightly disreputable artisans to romantic, poetic idealists.

He was born in Georgetown, South Carolina, and graduated from Harvard College in Boston in 1800. From 1800 to 1818, excepting three years that he spent in Boston, he was in Europe where he adopted a romantic classicism that influenced a number of painters who followed him.

He studied at the Royal Academy in London with Benjamin West and traveled and painted with John Vanderlyn. In 1805, he settled in Rome until 1808, and became friends with Washington Irving, Samuel Coleridge and other well-known Americans living abroad.

In England, he became recognized as one of the important history painters, especially in Biblical themes rather than the classical subjects he had painted in Italy. An impediment to his productivity was years of struggle on a large painting, Belshazzar’s Feast, begun in 1817 with the ten-thousand dollar subscription of ten wealthy Americans. He never completed it.

By 1818, he was settled in Boston, and lauded as the nation’s top artist. However, the demand for history painting was minimal, and he turned to smaller works, both figural and landscape, many of them romanticized, pastoral figures in landscapes.

His place in American art history is hard to pinpoint. His styles changed from Classicism to Romanticism, and his subject matter was wide ranging. He had tremendous influence on succeeding generations of artists who admired him for his refined sensibilities and serious, professional approach to fine art, but Thomas Cole, leader of the Hudson River School of landscape painting, was critical of Allston for his lack of interest in the virgin American wilderness. However, this new approach of artists finding personal inspiration in their native soil was rejected by Allston, whose interest in landscape was rooted in the European “Virgilian aesthetic”, meaning rooted in history. For Allston, nature was dignified only by its association with human history. “It followed that American scenery, which bore less than any other the marks of cultivation, was of all nature the least paintable. . . .When in Massachusetts Allston created a landscape, it was a memory of Italy, rendered in an unrealistic style that Cole was later to denounce.” (Flexner, 15)