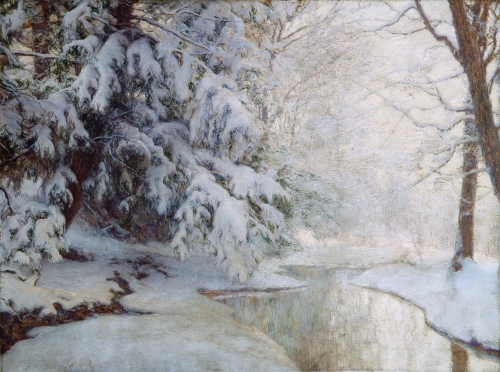 The landscapes of Walter Launt Palmer, particularly his snow scenes, were popular prizewinners throughout a long professional career that began before the artist was 20 years old.

Born in 1854 in Albany, New York, the son of sculptor Erastus Dow Palmer, Walter grew up amongst art and artists. His first lessons, in his teens, were with portraitist Charles Elliott and Hudson River School landscapist Frederic Church. Palmer’s work was first accepted for the National Academy of Design show of 1872, when he was only 18.

After a European tour in 1873, Palmer continued his art studies in Paris until 1876. One of his masters was Emile Auguste Carolus-Duran, whose influence is seen in the controlled tonality that modifies the academic tightness of Palmer’s early work. Subtlety of color, texture, and light became characteristic of all of Palmer’s work.

Reflecting several influences academic precision, oriental delicacy, impressionist effect these snowscapes demonstrate Palmer’s belief in the vivid colorist potential of snow. He once said, “Snow, being colorless, lends itself to every effect of complement and reflection”. Palmer painted his outdoor scenes in the studio, prefacing each with painstaking preliminary notes, sketches, and photographs, which he put aside when he began to paint.

Palmer’s best-known work and his own favorite, Silent Dawn (1920, Metropolitan Museum of Art, New York), is a picture of snow-laden trees above a still brook.

Walter Palmer died in Albany in 1932.