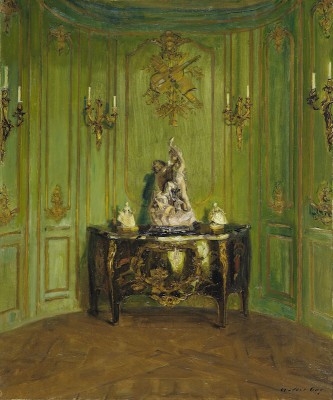 Born in Hingham, Massachusetts, Walter Gay became a painter who specialized in interiors, particularly those of eighteenth-century French buildings. His style was traditional, and he ignored the influences of modernist paintings he saw while studying in Paris beginning 1876. He remained in Europe the rest of his life.

In his compositions, the rooms are nearly always devoid of human presence but suggest that someone has been there. Many of his interiors are museum settings, and although he was not an impressionist, his work often had atmospheric effects.

When Gay died in 1937, he was described in “The New York Times” as the “Dean of American Painters in France,” where he and his Matilda moved in 1876. His first paintings there were genre subjects and realistic views of peasant life in Britanny, but he tired of these works, which he called “pot boilers.” In the 1890s, he began his signature interiors, mostly rooms in fashionable houses of the Gays and their friends. Reproductions of many of these paintings were published in 1920 by Albert Gallatin, also a painter.

The Gays, with a retinue of about twenty servants, loved old houses, and lived in an eighteenth-century apartment on the Left Bank in Paris from January through April and beginning 1904, in a chateau in the countryside at le Breau, near Fontainebleau. There they had 300 acres of grounds to roam. In 1907, they purchased this chateau which became quite a showplace and where they entertained extensively. However, during World War II, when Matilda was living there as a widow, German soldiers occupied the chateau, ruining much of the structure and plotting the destruction of the country the Gays loved so much. She was virtually a prisoner there, and the chateau was torn down in 1971.

The Gays also collected antiques extensively and stayed away from America because they did not like what they perceived as harsh newness of the country.