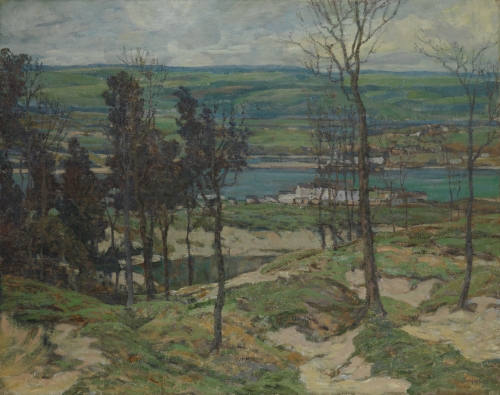 Walter Elmer Schofield painted atmospheric, impressionist landscapes filled with sun and bright colors, but became best known for his snowscapes and rushing streams, with the movement of the water often shown in diagonal lines, using broad fluid strokes. Using the same method as his friend Edward Redfield, Schofield completed large canvases in one sitting, and he loved the challenge of keeping his canvases anchored in bad weather.

According to his passport, he was born in 1866 in Philadelphia. His mother was the grand niece of Mary Wollstonecraft Shelley, author of Frankenstein. He attended Swarthmore College and the Pennsylvania Academy of the Fine Arts, studying with Thomas Anshutz from 1889 to 1892. Thinking he needed to supplement his art training, he went to Paris to study for three years, 1892 to 1895, and attended the Academie Julian. However, he soon tired of the strict regimen and chose to paint directly from nature in the Forest of Fontainbleau.

Later he went to England, where he eventually settled in the St. Ives art colony in Cornwall in 1903, along with his English wife, Murielle Redmayne, and children. While living in various cities in England — Yorkshire, Southport, Bedfors, and while attending the Academy, Schofield met American expatriate artists including Robert Henri, Edward Redfield, John Sloan, William Glackens, and Everett Shinn, members of “The Eight”.

Rebelling against the rigidity of the National Academy, “The Eight” were a group of painters whose historic exhibition was held at the Macbeth Galleries in New York in February 1908. Not all of “The Eight” painted in a similar mode, but they were generally interested in urban realism as well as Impressionism.

Although he became an expatriate, Schofield was recognized as part of the Pennsylvania Impressionist tradition. After about 1903, his Impressionist style often incorporated cobalt blues, and prevailed throughout the rest of his career. He continued to exhibit in the United States and to belong to American art organizations. In the 1930s, he traveled in the American West, painting in California, Arizona, and New Mexico.

From an early age, Schofield was familiar with Bucks County, north of Philadelphia, especially when visiting friends such as Edward Redfield. As a student at the Pennsylvania Academy of Fine Arts, he painted several geographic areas. In 1904, his Center Bridge, Across the River, earned him a Carnegie Institute medal. His friendship with Redfield ended in rivalry, however, as Redfield claimed the composition was initially his own concept, that Schofield stole it, and warned him to vacate the area. Schofield agreed, but Redfield’s influence to his painting style would continue.

Perhaps influenced by his affinity for the rugged outdoors and winter’s bitter elements, Schofield favored snow scenes, as seen in Bucks County and other venues of the Delaware River Valley. Marine vistas, often painted in Cornwall, England, were done in bold colors with thick, heavy brushstrokes.

Schofield’s works are included in many collections, domestic and abroad, as well as corporate and private collections.