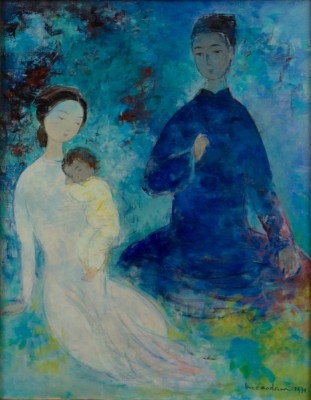 Vu Cao Dam was born in 1908 in Hanoi, North Vietnam. He began his formal education at l’École des Beaux Arts in Hanoi, when he was twenty-three he was awarded a scholarship that allowed him to study and travel in France. Moving to Paris in 1932 after obtaining the scholarship for further studies in sculpture he later left sculpture for painting.

In 1949 he moved to the south of France where he became a neighbor of Marc Chagall, who was a great influence on his work. He was also strongly influenced by the French Impressionists, especially Matisse and Bonnard.

There are two stages in his paintings. First silk painting, influenced by old Chinese painting; secondly oil painting influenced by his peers in France. He dreamed of trying to bring Indo-Chinese painting back into a place of prominence and believed that he could combine the traditions of the past and the qualities of Occidental paintings in order to accomplish that dream. He firmly believed that such a synthesis was possible, and his own paintings clearly demonstrate the delicate balance that he was able to strike between the two types of art.

Vu Cao Dam focused his talent on figure painting, with the exception of the occasional landscape. The women, young girls, folklore, and poetry of Vietnam are his favorite subjects. The women Vu Cao Dam paints become embodiments of the enduring beauty of womanhood and motherhood.

Vu Cao Dam paintings are in numerous museums. He is one of the most important Vietnamese painters of the 20th century.