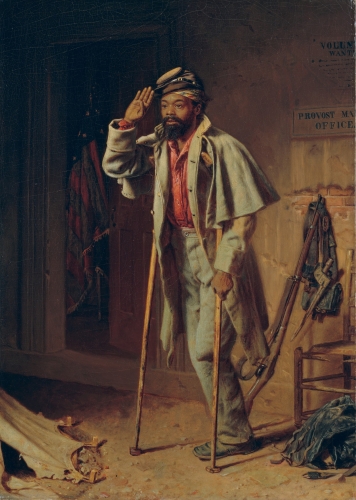 Thomas Waterman Wood’s father, John Wood, came to Montpelier from Lebanon, New Hampshire in 1814. The Wood family was of Puritan stock, and it was from Lebanon that John Wood, the father of the artist, married his wife Mary Waterman. She was described as having lived a simple, pious, good-natured and industrious life.

John Wood and his brother Cyrus were partners in a cabinet making business, the partnership concluding with the death of Cyrus in 1840. John’s other brother, Zenas, lived to be 84 years of age. John Wood was a vigorous citizen, active in his times, the captain of an artillery company and for a long time, a deacon in the First Congregational Church.

During Wood’s youth, Montpelier was not likely to inspire a man to paint. It was a small town of practical people, lacking in the means of art culture and instruction in art. The hills and valleys, however, were beautiful, filled at all seasons with a wonderful light, and these had and continued to have for Wood an inspiration and influence throughout his life.

While he lacked artistic surroundings in his youth, he also had the acquaintance of great contemporaries, Prentiss, Upham, Spaulding, Peck, Reed, Walton, Jewett, Langdon, Merrill, Dewey, Thompson, Baileys, Heaton, Lord, Lamb and many more besides, who left notable records in Congress, on the bench, at the bar, in theology, finance, legislation, party politics and in the bibliography of Vermont. These neighbors of his were good, strong men, whose characters and excelling work influenced the youth of Wood as also his conceptions of a strong art, as was evidenced in later years by much of his best work.

Before the introduction of daguerreotypes Montpelier was accustomed to receive an occasional visit from some peripatetic portrait painter and it was such a painter who first influenced Wood and started him in his career. The painter has been described as a “harum-scarum” character, but also as a “dashing painter”, who was able to seize quickly and firmly upon a likeness. There was also a friend, John C. Badger, who brought from Boston tubes of oil colors, brushes, palettes and some books about art. With these in hand the boys began with enthusiasm to develop their resources. There remains nothing of these first efforts; but when the furniture shop of John Wood was destroyed by fire in 1875 there could yet be seen on its plastered walls a number of figure pictures, drawn with dry paints, a sort of rude pastel.

When fortune permitted, Wood went to Boston and studied for a short time in the studio of Chester Harding, a portrait painter. In 1850 he married Miss Minerva Robinson, then living in Waterbury, Vermont, and in the same year he built a summer home in the Carpenter Gothic style on the west side of the mountain gorge through which the road leads up to Northfield. He named this home after his wife, making use of the Latin synonym, Athenwood.

During the 1850s, he found means of visiting galleries in London, Paris, Rome and Florence, having previously painted portraits in Canada, Washington and Baltimore. His first European visit, in 1858, was shared with Mrs. Wood. Upon their return he painted portraits in Nashville and Louisville, beginning at the former place The Fiddler, which was completed years afterwards and finally included in the Thomas W. Wood Collection in the Montpelier gallery.

At the age of 43, the artist permanently settled himself in New York City, opening a studio as a figure painter. This was in 1866, eight years after the exhibition of his first work in the National Academy of Design, The Baltimore Newsvendor (1858). This painting was sold by mistake to two persons, Mr. J. C. Brune of Baltimore and Mr. Robert L. Stuart of New York, resulting in a long, expensive lawsuit, terminated in favor of Mr. Brune.

During his residence in Louisville, Wood painted The Contraband, Recruit and Veteran, suggested by the sight of a black man in light brown jeans, who had but one leg and was hobbling along on home-made crutches. This celebrated work commemorates the transition of the African American from slavery to freedom and is now the property of The Metropolitan Museum of Art.

In 1869, Wood was elected an Associate of the National Academy of Design and, in 1871, an Academician. He became President of the American Water Color Society in 1878 and served in that office until 1887. He acted as Vice-President of the National Academy of Design for a period of twelve years beginning in 1879. In 1891 he became the President of the Academy. In achieving and discharging the functions of these offices for so many years, surrounded by artists of distinction, Wood evidenced the quality and high character of his personal attributes, his deep knowledge of his art, his unequaled courtesy and judgement, the acknowledged value of his own work and, above all, an unusual capacity for acquiring friendship and commanding the utmost respect as the result of a good life and noble heart.

It may be that his reputation as an artist will rest upon his figure pictures, although his very numerous portrait paintings involved much of the effort of his life and are most certainly characterized but simple and strong composition, great technical execution and a masterful use of colors. It may also follow that he will yet achieve his most memorable honors from the interpretations which he has made of great paintings, but from the stand point of those whose minds and hearts are won by considerations of local history the highest interest will be assigned to works in which Wood included characters from his native place. As examples of his work in this direction the following may be mentioned: The Yankee Pedlar had for its model a tin peddler known as “Snapping Tucker”, a resident of Calais, Vermont. When this work was sold for a large sum, Tucker promptly claimed his share upon the grounds of his intrinsic worth and natural capacity as a poser. The Village Post Office was taken from the interior of the old Ainsworth store in Williamstown, Vermont, but the figures were mostly taken from Montpelier people. Wood’s uncle Zenas was the postmaster and the group around the store, Boyden, Whittier and Bullock, were old-time residents. Their clerk was Horace Scribner, long esteemed as a generous country musician and as the organist of Christ Church. This painting was bought by Mr. Charles Stewart Smith, ex-president of the New York Chamber of Commerce. The scene for The Quack Doctor was located in front of the old arch which once spanned the head of State Street leading to East State. The old brick building, the home of Montpelier Book Bindery, still stands. This picture was bought by Mr. George I. Seneg for $2,000 and after his death was included in the sale of his entire collection.

Another successful painting was The Country Doctor. The artist found the proper model for this work with the aid of the Secretary of State, Dr. George Nichols, in the person of an actual country doctor, then representing the town of Jamaica in the legislature. This doctor bore upon his face the impress of his beneficent labors for more than 40 years in a back country town. Wood himself told the writer, in speaking of this painting, that many a person had said to him, “That doctor is the exact image of my father, who was also a country doctor.” This saying he regarded not so much as proof that he had achieved a concrete likeness but as an evidence of having successfully handed down the particular class idea of the old-fashioned country physician, as truly different in type from the city practitioner as was the country lawyer of former days from his brother in the city.

In 1891, Wood exhibited at the Academy a picture entitled A Cogitation, for which one of his Montpelier friends, Mr. George Ripley, posed. The composition is extremely simple, a farmer in his barn, leaning upon his pitchfork, his countenance thoughtful. This picture was bought by Mr. Harper and published as a full-page engraving in Harper’s Weekly during the Greeley campaign over the title “Is Greeley a Fool or a Knave?”. The humorous side of this incident consists in the fact that Mr. Ripley was the model was an ardent supporter of Mr. Greeley in that campaign, while the artist himself, so far as we know, never dabbled in politics.

These few examples sufficiently illustrate the influence which the place of his birth had upon Wood. He was not only a Vermonter but a great painter of Vermont ideas, conditions and character. Nor did foreign travel nor city residence nor any influence of professional connections ever tend to diminish the deep and abiding interest in his early home. The subjects of his works, his selection of characters, his yearly pilgrimage to Vermont, all demonstrate his filial loyalty and he gave to this sentiment of his heart its final expression in the establishment, as a gift to Montpelier, of its Gallery of Art. But, apart from this, the homes, offices and institutions of Montpelier and without are filled with the affectionate and great evidences of his work. The Vermont Historical Society possesses several excellent examples of his portraiture, all of great historic value and preserved in the Cedar Creek Reception Room at the Vermont State House: Samuel Prentiss (1881), United States Senator; Mrs. Samuel Prentiss (1895) and Dr. Edward Lamb (1895), gifts to the Society by the family of Mr. Prentiss. In 1896, the Society unveiled a life-size portrait of the distinguished publicist, the Hon. E. P. Walton, the gift of his wife and sister. Wood’s personal donations include portraits of the Rev. William A. Lord, D.D. (1874), minister of Bethany Congregational Church of this city, Daniel Pierce Thompson (1880), novelist and author of “The Green Mountain Boys”, and Justin S. Morrill, United States Senator, father of tariff legislation, promoter of agricultural colleges and chief up builder of the Library of Congress.

One of the noblest paintings now existing in the state is the artist’s beautiful translation of Bartolomé Esteban Murillo’s “La Madonna del Rosario”. This work, submitting the original with infinite tenderness and feeling, was painted in 1896 in the Dulwich Gallery and was consecrated by Bishop de Goesbriand for the service of Saint Augustine’s Church on July 26, 1897. The essential force of this sacred painting is its actual power to impress the beholder with a profound sense of the sacredness of motherhood and the worth and lasting values of purity and religious faith. In accepting this donation from Wood the Reverend Bishop said: “You have made a great Murillo of the seventeenth century our contemporary,” an expression not only true of itself but one which defines the special value of the truly great copies of great paintings.

In his copies, which were made with great care and a due appreciation of the masters, Wood exhibits the same broad range which is found in his other work. Between Murillo’s Madonna of the Rosary and Charles Robert Leslie’s Uncle Toby and Widow Wadman there is the greatest possible gulf. The first proves the deep conviction of the artist in the most sacred of human thoughts and the latter the great sense humor which so constantly found expression in his etchings, water colors and some of this genre paintings. In the Wood Collection at Montpelier there are 20 originals, 40 copies, seven water colors and 11 etchings, in all 78, a splendid and imposing example of thought, work and character of a single painter.

Adapted from the public-domain The Wood Gallery of Art, 1913, Capital City Press, as reproduced and attributed at the web site of the T. W. Wood Gallery & Arts Center.