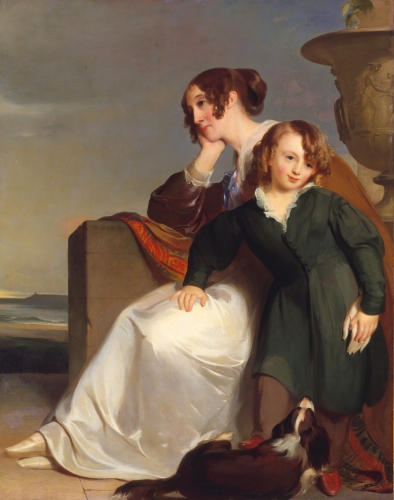 A teacher at the Pennsylvania Academy of the Fine Arts, Thomas Sully became one of the foremost early 19th-century portrait painters, known for painting pretty faces on his subjects, often disregarding reality.

He was the son of English actors and was born in Horncastle, Lincolnshire. He came to Philadelphia in 1792 when he was nine years old. Sully showed early drawing talent and first studied with his older brother, Lawrence, a miniature painter. To earn money, he tried unsuccessfully to have a career in insurance but then turned full time to painting and was able to be critiqued by Gilbert Stuart in Boston. He embraced Stuart’s interest in classical styles, but favored pretty colors and opaque and glossy surfaces. Like Stuart, his subjects appear heroic and seem to have a sense of purpose.

In 1801, he moved with Lawrence’s family to Virginia, but Lawrence died, so Thomas cared for the family and married the widow two years later. In 1808, accepting an attractive offer from a patron, he moved to Philadelphia for the remainder of his life excepting the new two years when a syndicate of patrons sent him to England to paint and study. He returned with a copy of an Old Master painting for each patron.

His twenty-three year old daughter, Blanch, accompanied him to England where he did a portrait of Queen Victoria, a commission filled from a request through the Philadelphia chapter of the Society of the Sons of Saint George. Blanch substituted for the Queen in many of the sittings, and even wore the British crown, the only American ever to have this distinction. She also modeled in Victoria’s state robes. The Queen was extremely pleased with the portrait, which was finished in Philadelphia.

In Philadelphia, Sully shared a studio with Charles Bird King, portrait painter, and taught at the Academy.