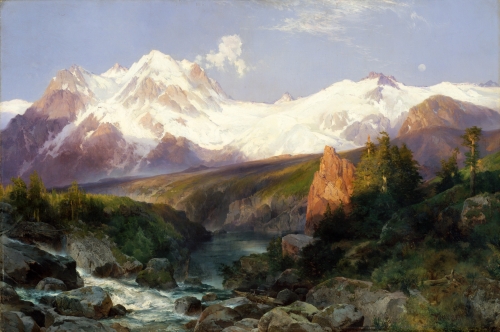 Regarded as the primary artist of the final decades of Western exploration, Thomas Moran made eight trips West between 1871 and 1892 and created a body of oil and watercolor sketches that remain a primary record of that period. In fact, his painting was so associated with the West that he was referred to as T. Yellowstone Moran. In 1873, he began signing his name with a monogram that incorporated “Y” into his initials, and from 1911, he added a thumbprint.

He was born in Bolton, Lancashire, England, and his father was a hand-loom weaver. In 1844, his family emigrated to Philadelphia where in 1853, he apprenticed to a wood engraving firm and sketched designs on blocks. He also studied with his older brother, Edward, a marine and historical painter, whose studio he shared.

In 1860, he made his first trip heading west, going to Lake Superior. Shortly after, he and Edward went to England where both brothers were heavily influenced by copying paintings of landscapist J.M.W. Turner. In 1866 and 1867, he returned to Europe and studied the tonalist painting style of Corot and did studies of Venice.

In 1871 at age 34, he began the subject matter that challenged him for the remainder of his life. He traveled West with geologist F.V. Hayden on the Hayden Survey to the Grand Canyon and the Yellowstone River. Returning he moved his studio to Newark, New Jersey, and began doing huge panoramic paintings from his sketches.

In 1872, he sketched in Yosemite and other parts of California, and in 1873, explored the Grand Canyon with Major Powell’s survey team. The United States Congress bought two paintings from these trips for $10,000 each. From 1881 to 1911, he traveled nearly every year, often in the West, and also painted in Florida and Europe.

In 1916, he settled in Santa Barbara, California where he died in 1926, having spent the later part of his life painting from sketches he made from earlier travels. His popularity never declined, and he was an active artist well into his 80s. By the time of his death, many of his favorite painting areas were protected in national park land.

Although he is credited as a great documentary painter, he did not intend his paintings to be literal records of what he saw. He was committed to mysticism, a personal spiritual vision that caused him to find inspiration in nature. He said: “All my tendencies are toward idealization. A place as a place has no value in itself for the artist” (Samuels 333). On his deathbed, at age 90, he envisioned on his ceiling future landscapes to paint and expressed ongoing disapproval of modernist, abstract art.

Sources include:
Matthew Baigell, Dictionary of American Art
Peggy and Harold Samuels, The Illustrated Encyclopedia of Artists of the American West