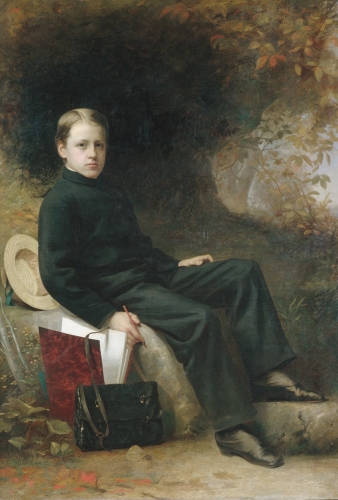 Born in Oswego, New York, Thomas LeClear was a genre and portrait painter who had studios in New York City and in Buffalo, New York. Considered one of the major artists of Buffalo’s first golden age in the mid 1800s, LeClear is nationally recognized for his portraits of children.

LeClear was mainly self-taught, but did receive some training in New York City. He began his career in Buffalo, London, and Canada, first painting portraits in Oswego, New York, in 1844, and then in New York City from 1845 until 1847. He settled in Buffalo, where he received a commission to paint decorative panels for a steamboat, and soon found himself part of the artistic nucleus that was forming in that city. Like so many other painters in the country at the time, he painted mostly portraits, but made his reputation with his appealing and refreshing scenes of childhood, such as his Marble Players, Young America, Itinerants, and his best known, Buffalo Newsboy. (1853, oil on canvas)

By 1861, Le Clear had left Buffalo and was living in Brooklyn. Two years later he had a studio in Manhattan’s Tenth Street Studio building, where William Holbrook Beard had lived a year earlier, from 1860 to 1861. Beard was later to marry LeClear’s daughter.

Despite living in New York City, both Beard and LeClear continued to be closely connected to Buffalo, especially through their involvement with the newly founded Buffalo Fine Arts Academy. LeClear and Beard, along with William John Wilgus and Lars Gustaf Sellstedt, were the major artists of Buffalo’s first golden age in the mid 1800s. LeClear taught private pupils in Buffalo, as did Wilgus and Sellstedt, and one of LeClear’s pupils was Albert Samuels, who painted genre and still-life pictures.

Buffalo presented its first major art exhibition in December 1861, and a fifth of the works were by Buffalo artists. The exhibition was a financial success and led to the formation in 1862 of the Buffalo Fine Arts Academy under the leadership of LeClear and Henry W. Rogers, one of Buffalo’s principal art patrons.

LeClear’s portraits of children are exemplars of mid nineteenth-century dress and demeanor, and one of his particularly intriguing works is Interior with Portraits, (about 1865, oil, 25 7/8 x 40 1/2 in., Smithsonian American Art Museum, Museum), a painting of a nineteenth century photographer taking the picture of a boy and girl in his studio. In this work LeClear records the arrival of a new technological form of “virtual reality”, photography, into the painter’s traditional territory. For three or four centuries, people had hired a painter to capture loved ones features for posterity. But then, after daguerreotypes were introduced in 1839, suddenly there was a choice. You could have a colorful, often life-sized painted likeness that looked more or less like your relative, or you could have a tiny, monochromatic, but startlingly real photograph.

Interior with Portraits is unsigned and undated, but it is said to have been painted by LeClear sometime around 1865. Supposedly LeClear was commissioned to make the picture by an elder brother of the two children shown in the picture. The little boy had just died when the picture was requested, but he was not then the small child shown; rather he was a 26-year-old volunteer fire fighter who had just perished in a hotel fire. His older sister had already died when she was an adolescent, more than fifteen years before the picture was made. Most viewers today think the little boy in the picture looks definitely dead, even stuffed.

One possibility is that the painter, for lack of live models to get likenesses, used a daguerreotype of the children as a substitute so he could get the features right. If so, he must have known he was entering a highly charged arena of controversy. Painters everywhere were threatened by the new photography, and vowed never to use photos as aids. LeClear obviously decided he would engage the issue.

The villain of this portrait game is the photographer himself, portrayed from the rear and concealing his face from us under his cloth. (Incidentally, his wet collodion camera was not manufactured before 1860, and this has helped in dating the painting.) All the paraphernalia of the professional artist is arrayed in the studio, which depicts the famous artists’ building, the Tenth Street Studio Building in New York, where, as mentioned above, both LeClear and Beard had studios. In the painting there is plenty of evidence that the inhabitant of the sky-lit studio was no mechanical hack. And yet, the artist is being asked to make way for an insolent photographer who has only learned to manipulate machines and chemicals.

So in his painting, Interior with Portraits, LeClear shows a scene within a scene, and then implies yet another still larger view from outside the canvas. Through this technique, LeClear used the occasion of this commissioned portrait to make an homage to the 17th-century Spanish master, Velázquez, whose painting “Las Meninas” used the same device. By implication, LeClear could be said to be paying homage to the art of painting.

Another of LeClears notable works is his portrait of President Ulysses S. Grant, dating from about 1880 (Oil on canvas, circa 1880, National Portrait Gallery, Smithsonian Institution). He painted two versions, one originally owned by Grant himself, and a second that became part of the White House collection.

His portrait of William Page painted in 1878 hangs in the Corcoran Gallery in Washington, DC. In Buffalo, New York, The Buffalo and Erie County Museum Collection of Paintings holds approximately 500 works documenting two centuries of the region’s changing landscape, as well as the men and women who helped shape the area’s history. LeClear is among the nationally recognized artists in the collection, along with William H. Beard, Raphael Beck, Alvah Bradish, Augustus Rockwell, Lars G. Sellstedt, and William Wilgus.