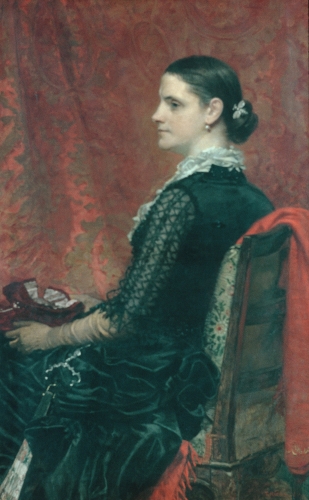 A native of Bucks County, Pennsylvania (b.1823), Thomas Hicks began as a carriage painter, apprenticed to his cousin and primitive style artist, Edward Hicks. As early as 1836 Thomas received his first instruction in portrait painting from his cousin, Edward, whose portrait Thomas painted the following year. He received much acclaim, and with his talents evident seemed destined to be a professional artist.

With his father’s encouragement, Hicks attended the Pennsylvania Academy of Fine Arts, but stayed only several months and then moved to New York City where in 1838, he entered the Antique Class of the National Academy of Design. Within the year, he was exhibiting portraits, history and religious paintings at the Academy, and at age 18 was elected an Associate for his painting, Death of Abel. Enrolled from 1840 to 1842 and 1844 to 1845, he continued Academy classes.

In 1845, Hicks began a several-year period of living abroad. He spent time London, Florence, and Rome, where he had an extended stay, and in Paris, he studied for about a year and a half with Thomas Couture.

In 1849, he returned to America and set up a studio as a portrait painter in New York City. From 1856, his studio was in the Astor Place building, distinguished by its foot-high lettering of Hick’s name on the facade.

Although Thomas Hicks was a painter of genre, literary, historical and religious subject matter, portraiture remained his ‘forte’. “By all reports, he had not only talent and training but also that other gift essential to the success of a fashionable portrait painter: personal charm.” (Harding, 268). Throughout his career many illustrious persons were his subjects such as Henry Ward Beecher, William Cullen Bryant, Margaret Fuller, Edwin Booth, Henry Wadsworth Longfellow and Abraham Lincoln, described as the first oil portrait of Lincoln.

Financially successful, Hicks built a family home he named Thornwood in Trenton Falls, New York, and because of its grandeur and his notoriety, it became a popular tourist attraction. However, most of his professional activity was in New York City, where he continued to exhibit at the National Academy of Design and served on the Academy Council. Also, he directed much energy to the Artists’ Fund Society, which he served as president from 1873 to 1885.

Having lived to see his reputation wane because of his portraiture style becoming out of date, Thomas Hicks died at Trenton Falls, New York, October 8, 1890.

Jonathan Harding, “Thomas Hicks”, Paintings and Sculpture in the Collection of the National Academy of Design, Volume I, 1826 to 1925. (David Dearinger, Editor)