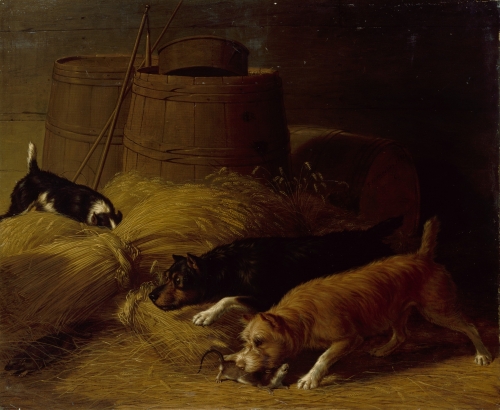 Rats amongst the Barley Sheaves, 1851

He studied art with William Mason in Philadelphia, and by 1833 was a professional painter as a portraitist and sign painter. He became much influenced by William Landseer’s animal paintings and the Flemish masters while visiting Europe in 1851. The Royal Academy in London exhibited two of Hinckley’s hunting scenes in 1858.

Living as a guest on the island of Naushon permitted him time for detailed studies of deer, and he produced many beautiful paintings of them. Traveling in California in 1870, Hinckley painted scenes of deer and elk on the rocky coastal promontories.

His genre works were skillfully composed, and his street scenes are graphic and authentic. While capable of landscapes in the Hudson River School style, he used landscapes mostly as backgrounds for his animals. In later years he painted landscapes more frequently than his animal works, but refrained from exhibiting.