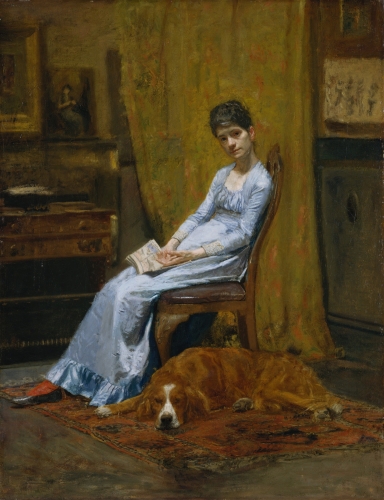 Born in Philadelphia, Thomas Eakins was a portrait and genre painter whom many regard as the father of modern realism in American Art. Embodying many of the ideals of advances in science, industry, and technology of his time, he was an avid student of science and anatomy, resulting in collisions with the moral boundaries of the Victorian era. In his quest for anatomical accuracy in his work, Eakins was a pioneer in his use of photography in art making, and established a tradition of portraiture that was distinctly American, his knowledge of the human body allowing him to create a sense of naturalism in his artwork.

After graduating from the local Central High School in Philadelphia with honors in mathematics, science, and French, he applied for a position as Professor of Drawing at his alma mater, but was rejected. He then registered at the Pennsylvania Academy of Fine Arts, where he studied drawing from antique casts. He rebelled at the outdated methods of these classes and ultimately changed his focus to anatomy studies given by Dr. A.R Thomas at the Academy. Paying $25 to legally avoid being conscripted into the Union Army for the Civil War, he continued to attend lectures on anatomy given at the Jefferson Medical Center. (R. Nagel)

In 1866 Eakins applied for admission to the Ecole Des Beaux Arts in Paris, which up to that time had consistently rejected American students. Eakins’ request came at the moment when that policy was changed, however, and Americans were welcomed, so he set sail immediately.

From 1866 to 1869, he was at the Ecole des Beaux Arts in Paris as a student of historical painter, Jean Leon Gerome. In Gerome’s version of academic painting, tone came first, and mastery of gradations of black and white were essential. Gerome was fanatic about drawing in preparation to painting, but Eakins later developed his own approach to preparatory drawings, purchasing a camera in 1880, a tool that became central to much of his art.

Eakins traveled widely during his time in Europe, but perhaps his most important visit was to Spain, where he hoped to gain relief from illness and depression. While in Spain he was exposed to work of Francisco Goya and Diego Velazquez, major influences on his emerging naturalistic style and his use of multi-layered glazes. He did not follow the path of many artists of his period who used the dashing, light- handed methods of the Impressionists or the subtle, mood evoking palette of the Tonalists. He was not interested in Impressionism, but rather in ‘reality’.

Upon his return to Paris from Spain, he found it necessary to leave due to the political instability brought on by the Franco-Prussian War (1870). Back in Philadelphia, he continued to attend anatomy and dissection exercises at Jefferson Medical Center and registered for surgical demonstrations at the Jefferson Hospital Gross Clinic. In fact, one of Eakins most famous later paintings, The Gross Clinic, of 1875 depicts a surgery by one of the Jefferson School physicians and was shockingly realistic at that time. For many years, the painting remained at the Jefferson Hospital, but in 2007 hospital personnel decided to sell the work to raise money for the hospital. Representatives of the National Gallery of Art and the Crystal Bridges Museum of American Art in Bentonville, Arkansas offered $68 million dollars, but fundraising in Philadelphia raised an equal amount, and the work was secured for the Philadelphia Museum.

He married Susan Hannah MacDowell (1851-1938), one of his students, who, with Eakins as one of the judges, had been the recipient of a prize awarded to the best female painter at a Pennsylvania Academy exhibition. A talented artist in her own right, Susan MacDowell Eakins painted throughout her life. She first saw Eakins in 1876 at the Hazeltine Gallery, where his painting The Gross Clinic (1875), was shocking Philadelphia with its bloody realism. She was impressed at once and decided to study with him at the Pennsylvania Academy.

MacDowell was twenty-five when she enrolled in 1876, and she studied there for the next six years. One of Eakins’ finest students, she was the first winner of the Academy’s above-mentioned Mary Smith prize, as well as a leader of the student body. Her career paralleled that of her husband, including the use of photography as an artistic technique. With her encouragement, he gave up most landscape painting to focus on portraits.

Thomas Eakins photographed cats, dogs, children, horses, and of course people, oftentimes nude. Some of his photographs are multiple exposures, investigations of photo-sequences that display his curiosity about human and animal locomotion, which he explored with fellow photographer Edward Muybridge. At times Eakins posed in photographs himself, including one, undressed, of himself astride the family horse. Others portray his wife, also at times nude.

In 1873, he accepted a faculty appointment to the Pennsylvania Academy, a position he held until 1886. At that time an event occurred which greatly affected his career. Eakins had been a firm believer that all students, male or female, should have the chance to work from nude models. The Pennsylvania Academy allowed female students to participate in life drawing classes, but insisted that the males wear loincloths, a policy Eakins adhered to until one day in 1886. In the presence of both male and female students, Eakins removed a loincloth from a male nude model, ostensibly to demonstrate a detail of anatomy. Despite his protests, he was asked to resign his position as Director of the Schools and Professor of Painting at the Pennsylvania Academy. Many students resigned in protest and created an alternative society, the Art Students’ League of Philadelphia in an effort to provide Eakins with a teaching post, and so their teacher could carry on life-drawing classes as usual.

Nonetheless, he was expelled from the Academy on charges of ‘conduct unbecoming a gentleman’ amid rumors also questioning his sexual orientation. It is perhaps worth note that the members of the Philadelphia Sketch Club, however, voted against the expulsion. In 1895 he was again dismissed for a similar reason from his position at the Drexel Institute of the Arts.

All of these events caused serious consequences to his career, his marriage, and his health, resulting in a reoccurrence of his depression, which he treated by traveling to the BT ranch in the Dakota Territory, (now North Dakota), where he painted his ‘Cowboy’ series of paintings. For ten weeks he traveled in the Dakota Badlands during the summer of 1887, the inspiration for his noted work Cowboys in the Badlands. (note: sold at auction for $5,383,500, Christie’s ’03.) The cowboys in the painting are loosely modeled after photographs Eakins took while in the Badlands. The horses used for the trip he purchased, and upon his return sketched them at his sister’s farm in Avondale, Pennsylvania. In 1887, shortly before leaving on the trip, Eakins had met the poet Walt Whitman, who described Eakins at the time as ‘run down and out of sorts’ (philamuseum.org) when he began his travels, but much improved upon his return. The artist and the poet were to remain close friends until Whitman’s death in 1892.

His boating scenes on the Schuykill River were among the first recreational scenes ever painted in this country. He also had wide-ranging curiosity about physiology, athletics, as reflected in his sporting works, such as his ‘Boxer’s’ series.