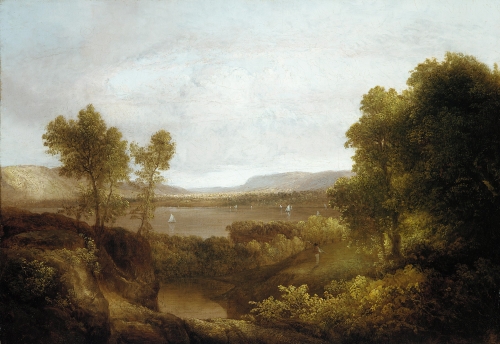 Born in Philadelphia, Thomas Doughty was the first American artist to work exclusively as a landscapist and was successful both for his skill and the fact that Americans were turning their interest to landscape. He was known for his quiet, often atmospheric landscapes of the rivers and mountains of Pennsylvania, New York, especially the Hudson River Valley, and New England.

A criticism of his work was that “there was often more of Doughty in his landscapes than there was of the location he painted.” His landscapes were popular early in his career, but he was surpassed by Thomas Cole and other Hudson River painters in the view of a public that wearied of his work that was perceived as “over-mannered and too unspecific compared to that of his successors.” (Zellman 112)

Doughty was trained in leather manufacturing but turned to art as leisure activity and received only three months of training in India-ink drawing. In 1820, he turned to art completely, and by 1822, was exhibiting at the Pennsylvania Academy of Fine Arts and two years later was elected an academician. In 1827, he was elected an honorary member of the National Academy of Design.

He was also a creative lithographer, and from 1830 to 1834, published with his brother a monthly journal called Cabinet of Natural History and American Rural Sports. In this publication, birds and animals were drawn precisely with landscape backgrounds by Doughty.

Doughty spent much of his life in Baltimore, Washington, Boston, and New York City, but for much of the time made his home in Philadelphia until 1832 when he moved to Boston. After five years in Boston, he went to England for two years. On his return to America in 1838, Doughty lived for a time in New York City, but in 1839-40 he was at Newburgh, New York on the Hudson River.