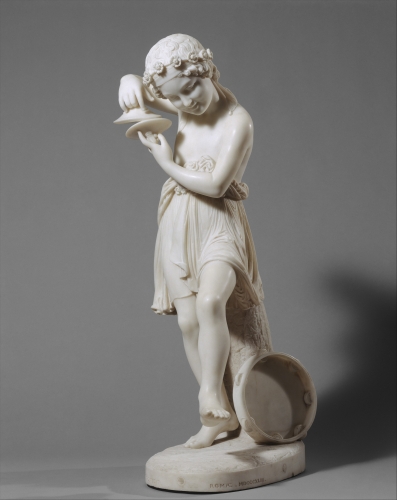 One of the leading 19th-century American neoclassical* sculptors, “Thomas Crawford was the only one of the first generation of American neoclassical sculptors to become known as master of public statuary.” (Tolles, 34) He was born in New York City and spent most of his career in Rome, Italy with only brief trips to the United States including in 1844, 1849, and 1856. “Crawford

He began his career working for the stone-cutting firm of Frazee and Launitz, owned by John Frazee and Robert E. Launitz, two individuals who would have an impact on Crawford’s career. Frazee was one of America’s first artists to work successfully in the classical* tradition, and Launitz introduced Crawford to his teacher, Bertel Thorwaldsen, then a famous Danish sculptor.

In late 1835, Crawford sailed from New York City to Rome, with a letter of introduction from Launitz to Thorwaldsen. Crawford became his American pupil, and established a studio in Rome, which became a popular place to visit by American tourists. Crawford received many commissions for portrait busts, including political figure Charles Sumner, who became his friend and strongest supporter. Crawford’s bust of Sumner brought praise and along with it other commissions, which allowed him to be challenged with more idealism as subject matter. One of these pieces was Orpheus, Crawford’s first major neoclassical conception. It was a full-length ideal work, and received much praise.

Sumner persuaded a group of wealthy patrons to raise money to have it carved in marble and then acquire it for the Boston Athenaeum. So successful was Orpheus in its combination of lofty theme and purity of revived classical aesthetic that Crawford was honored by a small sculpture exhibition at the Athenaeum, the first one-man exhibition of the work of an American sculptor.

Orpheus’ installation brought Crawford fame equal to that of his well-known contemporaries working in Florence, Horatio Greenough and Hiram Powers. It also brought him commissions, not only for the portraiture work but for sculptures with lofty, idealized themes.

Crawford was also a prolific sculptor of public monuments. In 1844, Crawford left Rome for New York City, marrying his wife, Lou, and trying unsuccessfully to get Congress to commission an equestrian George Washington. But after a year, the couple returned to Rome, where he continued to create portrait busts, idealistic works, and at least one historically themed work, Dying Mexican Princess. However, in 1849, Crawford won a competition to do an equestrian statue of George Washington for the city of Richmond, Virginia.

His most complete work was The Progress of American Civilization (1853-63), the head sculpture for the Senate Wing of the U.S. Capitol, Washington, D.C. The theme of the work is the contrasts of the civilization of the white man with the dying way of life of the American Indian.

Crawford died at an early age in London after surgery to remove a tumor behind his eye. Much of his work was completed by his American colleagues in Rome, under the supervision of his widow. Then his studio casts were placed on exhibition in a New York Armory, a collection designed to become the core for a museum in the city, but unfortunately was destroyed in a fire.