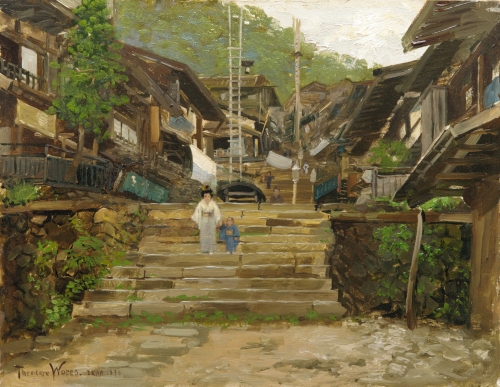 One of California’s most famous painters during the post-Gold Rush expansion period, he was prolific and diverse with work ranging from subjects of the Orient, South Seas, the American Southwest, and the West Coast. He had a special fascination for Oriental subjects and made regular visits to Chinatown in San Francisco. His style began with the heavy palette and dark tones of the Munich School but later changed to Impressionism.

He was born in San Francisco and began taking art lessons when he was age 12 from Joseph Harrington. He enrolled in the San Francisco Art Association’s California School of Design when it first opened and studied there with Virgil Williams.

From 1875-81, he was in Munich at the Royal Academy and studied with William Merritt Chase, Frank Duveneck, and traveled with them to Italy where he met James Whistler, who persuaded him to study Japanese art.

He returned to San Francisco, shared a studio with William Keith, and was one of the so-called “bohemian” artists–enthusiastic, free spirited, and willing to experiment artistically. He painted many Chinatown subjects and was the first instructor of the San Francisco Art Student’s League.

From the mid-1880s to the late 1890s, he traveled extensively, spending three years in Japan where he was one of the first American artists to paint there and was unusual because he was more interested in painting the inhabitants than the landscape. He also went to London, New York City, Boston and again to Japan where he was disappointed because he thought the country was becoming too Europeanized. Seeking more exotic subjects, he went to Samoa before returning to San Francisco where he began painting California landscapes for the first time in addition to portraiture.

From 1901 to 1903, he traveled and painted and in Hawaii, held an exhibition with the Kilohana Art League of over one-hundred of his paintings, some of them including “The Lei Maker,” which remain in the collection of the Honolulu Academy of Arts.

In 1906, he lost his home and studio in the San Francisco fire and earthquake. The following year until 1913, he became Dean at the California School of Design. His years after that included much more travel including Hawaii, Calgary, Canada, and New Mexico where he lived in Taos from 1915 to 1917 and did Indian figure and portrait painting.

Internationally known, Wores had extensive affiliations and exhibitions including the Salmagundi Club of New York; the Art Society of Japan, and the San Francisco Art Association. He exhibited at the Paris Salon, the Royal Academy of London, and the Chicago Exposition in 1893.

He died in San Francisco on Sept. 11, 1939 having had a long and successful career.