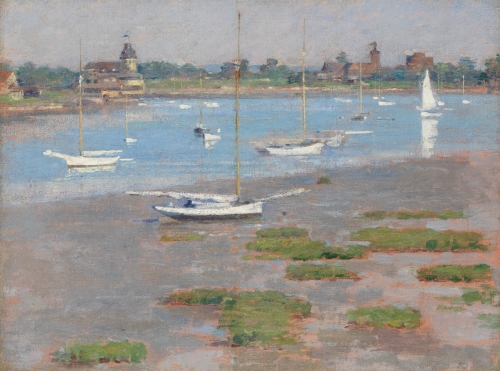 Theodore Robinson’s skillful, vibrant interpretation of Impressionism established him as a key proponent of the style, both in the United States and abroad. In addition to developing his own version of this artistic style, he promoted the work of Impressionist painters in his teaching and writing.

Born in Irasburg, Vermont, in 1852, Robinson moved to Wisconsin at an early age. Encouraged by his mother, he began formal artistic training at the Chicago Academy of Design in 1869. Shortly thereafter, the chronic asthma that ultimately cut short Robinson’s life forced him to suspend his studies. Four years later, Robinson resumed his studies in Chicago before enrolling at the National Academy of Design in New York City in 1874. He became involved in the New York art world and participated in the founding of the Art Students League of New York.

Two years later, Robinson, like many of his contemporaries, went to Paris to continue his art education at the Académie Julian. He proceeded to the École des Beaux-Arts, the studio of the French academic painter Jean-Léon Gérôme. He also studied at the private atelier of Emile-Auguste Carolus-Duran, where he met a number of American art students, including J. Carroll Beckwith and John Singer Sargent. Beginning in 1877 he spent summers in the village of Grèz-sur-Loing, a gathering spot for American artists working in the French Barbizon style. After a trip to Venice during which he met James Abbott McNeill Whistler, Robinson returned to the United States in late 1879. Having exhausted his financial resources, he established himself as an art teacher in New York City, assisted John La Farge with a number of mural projects, and worked for Prentice Treadwell on architectural decorations in Albany, Boston and New York. By 1884 he had accumulated enough money to return to his beloved France.

Based in Paris, Robinson spent summers at Barbizon and visited Holland and Dieppe. The turning point in his career arrived when, in 1887, he spent the first of five summers at the small farming village of Giverny, located on the Seine in the Normandy region of France. Claude Monet had settled there in 1883; however, scholars are unsure whether Robinson and his artist-friends were aware of the French painter’s country home when they made their first trip there. Irritated by the presence of the young American painters in Giverny, Monet took pains to avoid them. Nevertheless, Robinson was one of a select few Americans to develop a close friendship with the French artist. Passages in Robinson’s personal diaries and letters reveal that he made frequent trips to Monet’s home to discuss matters of art.

Although not formally a student of Monet’s, Robinson became part of his inner circle and soon began painting in an Impressionist style. Robinson certainly borrowed artistic ideas and techniques from Monet, but his work was immediately distinguished from Monet’s by its thinner application of paint and softer, more muted palette. Like almost all American Impressionists, Robinson never fully dissolved the human figure and other forms in light, but retained solid forms, vestiges of his academic training. Robinson embraced Monet’s practice of painting the same scenes outdoors at different times of day in order to more fully understand the effects of light upon the landscape.

In December 1892, Robinson left France to set up permanent residence in New York. His fame as a practitioner of Impressionism preceded him—he had been awarded the Webb Prize for landscape by the Society of American Artists in 1890. Robinson assumed a public role as an advocate for Monet’s work. In an influential article published in Century Magazine in September 1892, he praised and defended the French artist’s Impressionist style.

Robinson spent the rest of his career painting landscapes, often working in the Connecticut countryside in the company of close friends J. Alden Weir and John Henry Twachtman. They would paint together, critique each other’s work, and endlessly discuss and debate Monet’s theories. Through his work as teacher at the Brooklyn Arts School, Evelyn College in Princeton, New Jersey, and the Pennsylvania Academy of the Fine Arts in Philadelphia, Robinson also introduced the Impressionist style to a younger generation of American artists. By 1896, when he died of an acute asthma attack at the early age of forty-three, Robinson had succeeded in educating the American eye to an appreciation