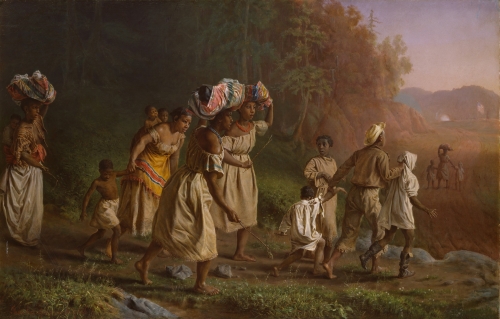 Born and raised in Hanover, Germany, Theodore Kaufmann, military, historical, and portrait painter, became best known for his Civil War paintingsof the exploits of Admiral Farragut and General Sherman. He trained in Munich, Hamburg and Dresden as a portrait and history painter with Peter Cornelius, Fredrick Kaulbach and Wilhelm Schwar. He exhibited his history paintings in Vienna and Dresden. He participated in the revolution of 1848 in Germany and left in 1850 to escape the upheavals following that period.

Kaufmann arrived in New York City in 1850, established a portrait painting studio and reportedly instructed Thomas Nast, political cartoonist. He enlisted in the Civil War as an artist-correspondent for the Union armies, and was in Boston by the 1860s and in Washington DC by 1870. In 1871, he established a studio in Boston and settled there permanently. Little is known of the later years of his life. He is noted for western subject painting including “Train Attached by Indians”, but there is no evidence he ever traveled West.

Source:
Peggy and Harold Samuels, “The Illustrated Encyclopedia of Artists of the American West”
Peter Falk, “Who Was Who in American Art”