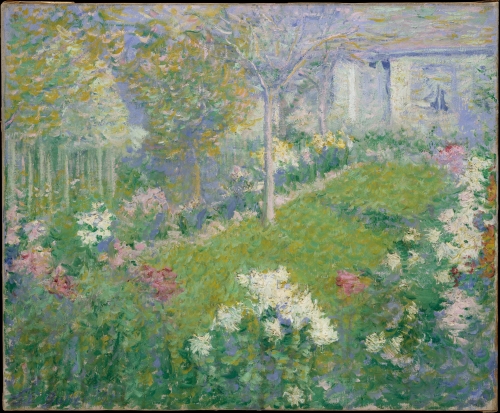 Theodore Earl Butler was born in Columbus, Ohio, the son of a prominent businessman. After college he attended the Art Students League of New York, studying under painters William Merritt Chase, J. Carroll Beckwith, and Thomas Wilmer Dewing. In New York he became a close friend to the Impressionist painters Theodore Robinson, J. Alden Weir, and his fellow student at the League, Philip Leslie Hale, who would be a prominent member of the Boston School of painters around the turn of the century. Together with Hale, Butler set off for Paris late in 1886. During the following year he studied at the académies Julian and Colarossi and in the independent atelier of Carolus-Duran, with whom Beckwith had previously studied. Soon, Butler received recognition from the Paris Salon, garnering an honorable mention in 1888 for his painting “La Veuve (The Widow).” That same year he visited Giverny for the first time; he settled in the quiet village in 1892, becoming part of a vital art community.

The American expatriate artists at Giverny constituted a close-knit group, very supportive of each other and very interested in the latest art trends and theories. The greatest influence on them all was Claude Monet, the longtime Giverny resident. Butler married Suzanne Hoschedé, Monet’s stepdaughter, in 1892, thus becoming intimately connected to the Monet family despite the older artist’s initial objections. Actually, Butler and Monet grew to be very close to one another; however, artistically speaking, Butler’s personal direction was always very clear, and he pursued an independent and daring course throughout his career.

In 1899, Suzanne passed away, leaving Butler with two small children, Jimmy, age six, and Lili, age four. Suzanne’s sister Marthe became their surrogate mother and eventually Butler’s second wife, but it was a marriage based upon friendship and necessity, for Butler mourned the loss of Suzanne for many years.

Butler returned to the United States with his family in 1913 to install murals in the suburban New York home of William A. Paine. He contributed two canvases to the International Exhibition of Modern Art (more familiarly known as the “Armory Show”), which was held in New York that year. The First World War forced the Butlers to remain in New York until 1921. Butler served as vice president of the Society of Independent Artists and participated in the society’s exhibitions on a regular basis.

Following his return to Giverny, Butler worked tirelessly for the next decade and a half. Utilizing a palette of impressionist colors, he continued to challenge himself professionally as he explored various post-Impressionist techniques. He participated in the annual exhibitions of the Salon d’Automne, of which he was a Sociétaire. Butler died at Giverny on May 2, 1936.