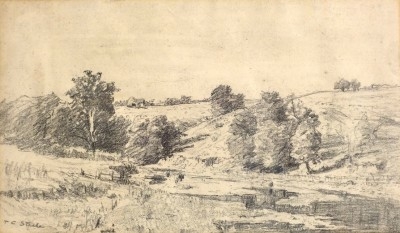 Hills of Brown County, Indiana, circa 1915

One of the most outspoken proponents of Impressionism in the Midwest, Theodore Steele became a leading artist of the Hoosier School, Indiana painters who were the first Midwestern Impressionists. Their favorite place to paint was in Brown County, where they gathered at Steele’s home, known as the “House of the Singing Winds.”

He was from Waveland, Indiana, and began his career as a portrait painter, although he also did a few landscapes. In 1873, he moved to Indianapolis and cultivated a friendship with Herman Lieber, who became his patron. Steele studied at the Indiana School of Art with its founder John Love, who had studied with Jean Leon Gerome in Paris and had also painted at Barbizon.

Lieber raised the funds to send Steele and his family to Europe, and Steele chose to go to Munich because of being able to study there with Frank Duveneck, prominent Ohio painter, and because it was less expensive than Paris. Steele’s primary teacher in Munich was Ludwig Loefftz, with whom he studied figure painting. He also worked with expatriate J. Frank Currier.

In 1885, Steele returned to Indianapolis and established an art school with William Forsyth. He did both portraiture and landscapes, many of them dark and dramatic in the style known as the Munich School. The next year, he began to explore the Indiana countryside and turned almost completely to landscape painting because he was fascinated in the way it conveyed a sense of place. His work became much more colorful, and gradually his style became much more Impressionistic.

By 1893, Steele was exhibiting Impressionist paintings at the Chicago Exposition of 1893, and newspaper reporters and other writers, particularly Hamlin Garland, became publicizing Steele and other Midwestern Impressionists. Steele emerged as the leader and also became their spokesman. In a famous debate in 1896 with the conservative Chicago painter F. Hopkinson Smith, Steele took a strong stance for this new Modernist art called Impressionism. To advocate their theories, Steele and his followers organized the Society of Western Artists in 1896, and some persons were saying that Steele’s paintings were every bit as good as those of Claude Monet, a leading exponent of French Impressionism.

In 1906, after his first wife died, Steele remarried and settled in a remote area of Brown County, and from there until his death in 1926, became the outstanding figure in Indiana art in the early part of the 20th century. In 1910, the John Herron Institute of Indianapolis held a one-man show of his work, then totally committed to Impressionism.

In 1902 and 1903, Steele toured the American West, painting in Oregon along Puget Sound and in the San Francisco area, where he associated with William Keith. Steele also taught at Waveland Collegiate Institute form 1865 to 1868, and was honorary porfessor of art at the University of Indiana from 1818 to the time of his death.