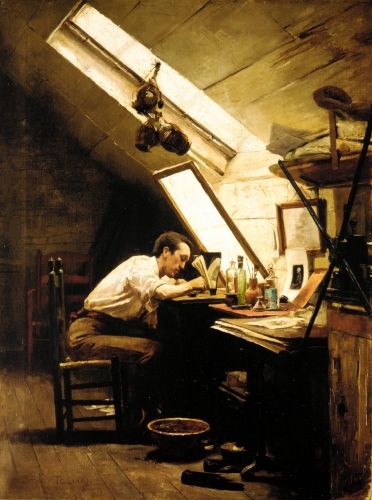 Born in Concord, Massachusetts, Stacy Tolman became a noted painter in Rhode Island, where he taught at the Rhode Island School of Design. He studied with Otto Grundman in Boston and at the Academie Julian in Paris.

He settled in Pawtucket, Rhode Island and painted in both oils and watercolors, and is best known for his work in portraits, landscapes, villages and interior genre.

He was an early member of the Providence Art Club, and Providence Watercolor Club. His studio, previously used by Charles Walter Stetson, was in the Fleur de Lis Building, in Providence with Sidney Burleigh, George Whitaker, Chester Dodge, Frank Mathewson, and Gertrude Parmelee (Cady).

Tolman traveled to Europe and the Middle East to paint, and exhibited at the National Academy of Design, and Pennsylvania Academy of Fine Arts.