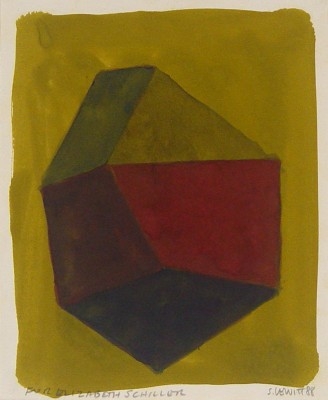 Known for his modular white cube sculpture, geometric drawings and abstract design paintings including many wall paintings that took teams of people to execute, Sol LeWitt was a major promoter of dominant post World War II Conceptualism and Minimalism. He used geometric shapes and lines to challenge his viewers, and sometimes they seemed logical and other times they seemed to have no basis in either reason or reality.

Although he was highly active in New York City, Sol LeWitt shied away from any semblance of art celebrity life style and spent much of his later life working from his home and studio in Chester, Connecticut. At the beginning of his career when he was gaining notoriety, conservative critics panned him fiercely. Seeking to get away from the frenetic activity of the New York art scene, Sol LeWitt went to Spoleto, Italy in the 1980′s and remained there for many years. The influence of Italian culture seemed to lend a new opulent quality to his work, and also the launching of his wall paintings, which he called drawings even though they were done with acrylic paint. “He began making colored flagstone patterns, spiky sculptural blobs and ribbons of color, like streamers on New Year’s Eve, often as enormous decorations for buildings around the world. It was as if he had devised a latter-day kind of Abstract Expressionism . . .” (Kimmelman)

Of Sol LeWitt’s personal modesty it was written: “He tried to suppress all interest in him as opposed to his work; he turned down awards and was camera-shy and reluctant to grant interviews. He particularly disliked the prospect of having his photograph in the newspaper.” (Kimmelman)

Sol LeWitt was born in Hartford, Connecticut to Russian immigrant parents. His father, a doctor, died when he was age six, and he and his mother then went to live with an aunt in New Britain, Connecticut. His mother encouraged his art talent and enrolled him in classes at the Wadsworth Atheneum. Sol LeWitt’s subsequent residence in Chester, after he was a well-known artist, was near the Atheneum, and he became a strong supporter of that institution including the securing of a long time loan to it of a highly prestigious private collection of modern art.

The artist earned a BFA degree from Syracuse University in 1949, and then was drafted in the Korean War. His special assignment was making posters for the Special Services. From 1955 to 1956, Sol LeWitt worked as a graphic designer for architect I.M. Pei, who was beginning his career. He also did pasteups for Seventeenmagazine. In 1962, he did his first relief sculpture, and from 1964, executed the cubed works for which he is most known. However, he felt adrift as an artist because Abstract Expressionism was waning and he was unconfident about what he had to offer that was unique.

However, a change came about because Sol LeWitt took a job at the book counter of the Museum of Modern Art where he associated with other young artists who were also working there including future ‘big names’ such as Dan Flavin, Robert Ryman and Robert Mangold. Sol LeWitt became intrigued by Minimalism and by the engineering aspects of Russian Constructivism and of Eadweard Muybridge’s experiments with motion photography. From these exposures, “he decided to reduce art to its essentials, ‘to recreate art, to start from square one’ beginning literally with squares and cubes.” (Kimmelman) In the next years, Sol LeWitt became fascinated with the impermanence of Conceptualism, which seemed to suit his apparent lack of being impressed with whether or not his own reputation was sustained in the public mind.

His goal with conceptual sculpture was to explore in an impersonal way formulas with which structures are created, and to focus on abstract philosophical theories, disassociated from religion and personal emotions. Sol LeWitt painted many of his sculptures white to direct the viewer to these underlying thought processes rather than to the piece itself or to himself. In other words the “concept” was the most important part of the work and planning it was more important than execution. Sol LeWitt was a great believer in simplicity. In 1967, he said: “Most ideas that are successful are ludicrously simple. Successful ideas generally have the appearance of simplicity because they seem inevitable.”

He was also known for his generosity with lesser-known artists. Sol LeWitt often gave them credit as ‘collaborators’ so that their names appeared with his, and he would go out of his way to be helpful including showing with them in small galleries and supporting publications about their work.