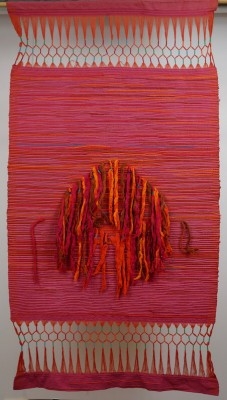 On my first visit to the American artist Sheila Hicks’s home and studio here, I brought my 7-year-old son, at Ms. Hicks’s suggestion. “Tell him you’re going on a treasure hunt,” she had instructed me. In fact, the Cour de Rohan, where Ms. Hicks has lived since 1970 — a tranquil, picturesque cobblestone courtyard tucked away behind the multiplexes of the Place de l’Odéon — was only the first of many remarkable finds that day.

Ascending the stairs we were welcomed into the foyer, where an Alexander Calder gouache, inscribed to Ms. Hicks, hung near an elaborate tantric numerological diagram. But our eyes were drawn to the salon, where a series of framed weavings, most no bigger than a hand — what she calls minimes, or small studies, which she has made continuously for five decades — were posed against a wall, as if by accident. Peering more closely we discovered toothpicks, razor-clam shells, rubber bands and hair, along with every imaginable permutation of string and thread, woven into their potent and intimately beautiful geometries.

We were ushered into a small greenhouse with hanging baskets and found, on a table, the simplest of looms — a wooden frame stuck with nails and stretched with a warp — where another minime was taking shape, verdant and delicate as a jewel. Then we were put through a series of tests: close your eyes and guess whether the thread brushing against your cheek is linen, silk, bamboo, mohair, an almost iridescent steel fiber (which Ms. Hicks helped to develop for a Japanese tire company) or synthetic raffia.

The visit’s spirit of open-ended discovery was very much in keeping with the work that Ms. Hicks, 76, has been making for nearly half a century at the intersection of art, design, crafts and architecture. Her resistance to being slotted into any one of these categories has been the natural outgrowth, it seems, of an omnivorous curiosity and a profound allergy to academic distinctions. It may also go some way toward explaining how her work, which ranges in scale from near-miniature to monumental, and at times has anticipated contemporary art practices by decades, has long slipped through the art world’s cracks.

All that is changing now. “Sheila Hicks: 50 Years,” a show organized by the Addison Gallery of American Art in Andover, Mass., and on view at the Institute of Contemporary Art in Philadelphia, highlights the work of this classically trained modernist — a global artist before the term was fashionable — who adopted the language of textiles as her primary medium and expanded it exponentially. Not that her new visibility is making her any easier to pin down.
“I have no interest in classifying Sheila as a contemporary artist whom we just ‘missed,’ ” said Jenelle Porter, who organized the Philadelphia show (and is a curator at the Institute of Contemporary Art in Boston). Ms. Hicks, she explained, has always been “very aware of what’s been going on in contemporary art, but she’s also worked with artisans and craftspeople all over the world, and she’s invented new techniques and materials.”
“She goes so much farther than anyone in the design world or the craft world or the art world,” Ms. Porter said. “She crisscrosses back and forth with so much ease.”

Ms. Hicks’s life has been “a tissue of threads woven together on purpose or through chance, fertile encounters,” wrote Monique Lévi-Strauss, a scholar of textiles, in a 1973 catalog. She was born in the small town of Hastings, Neb., in 1934, into a family that had arrived in covered wagons generations earlier. Though her family moved around a lot during the Depression, Ms. Hicks and her brother returned each summer to Hastings, where their great-aunts instructed them in music, art and reading, as well as pioneer skills like spinning, sewing and weaving.

She majored in art at Syracuse University, then transferred to the Yale School of Art (then one of the few co-ed divisions at the college), where she studied with Josef Albers, the German-born head of the art department, who had transplanted Bauhaus ideals to New Haven, and with George Kubler, the influential historian of Latin American art. (Ms. Hicks’s fellow students included Eva Hesse, who would also go on to explore unconventional, “soft” materials like latex in her post-minimalist sculpture.) A picture of Peruvian mummy bundles, shown in Dr. Kubler’s class, sparked Ms. Hicks’s interest in textiles, which was further galvanized when Albers took her home to meet his wife, Anni, the celebrated Bauhaus weaver.