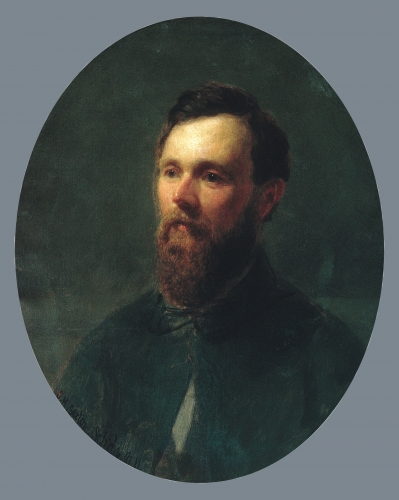 Portrait painter, Samuel Hayden Sexton was born in Schenectady, New York in 1813 and he lived and worked there until his death in 1890. He was the first son of Ezekiel Sexton and his second wife, Henrietta Hayden, daughter of Samuel Hayden, a miller from Glenville, New York.

Sexton was a shoemaker by trade, who taught himself how to paint and made a reputation as a portrait painter in the region. Self-taught as an artist he taught himself from books and an annual visit to the exhibition of the American Academy at New York.

Around 1833 Sexton completed his first known painting, The Schenectady Massacre. This painting portrays the disastrous night in February 1690 when the French and the Indians raided the unguarded stockade and burned Schenectady to the ground.

Sexton painted until his death, but the majority of his paintings were completed before 1855. Sexton painted more in the 1840′s than he did in any other period of his career.

Among his work approximately seventy paintings survived. Sexton known primarily as a “face painter” did some landscapes and historical paintings. Exhibition records of the National Academy of Design and the American Art-Union refer to Sexton as a landscape painter in the 1840′s and 1850′s, but the location of the landscapes they list is not known.

Most of his subjects were painted from life, but he was known to have copied from other paintings and occasionally from a sketch.

Sexton’s portraits are primarily of Schenectady residents and most of the canvases remain in Schenectady collections. His portraits showing the frontal view were usually a half-length view of the sitter. The subject was often seated with one arm rested on the side of the chair and hands were folded over each other or one hand held an accessory. Attention was paid to details such as shawls, beaver hats, lace caps and ruffles, glasses and books. The costumes of his sitters were often in tones of black and white, draperies and chairs in shades of red, while green often blended into the background color.

Sexton signed many of his paintings. In a distinctive script, he painted his name and either Schenectady or Schenectada with the date on the reverse of his canvases. It is unusual to find his landscapes of 1890 that are signed on the front of the canvases, in the lower left-hand corner.