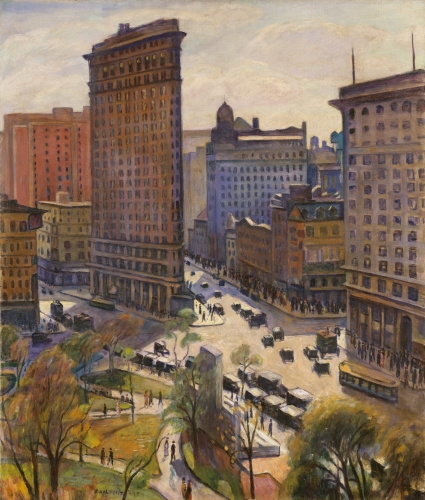 Born in Bialystok, Russia, (now northeastern Poland) Samuel Halpert emigrated to the United States in 1890 with his parents when he was age five. He was raised in the Lower East Side tenement area with other East European Jewish immigrants. One of his adult friends at that time was sculptor Jacob Epstein who took him to art museums, and encouraged his artistic talents and interests.

During the 1890s, he lived on and off in Paris. He studied at the National Academy of Design in New York with J Carroll Beckwith, who raised funds to send Halpert to Paris where he studied at the Ecole des Beaux Arts with Leon Bonnat. He also studied at the Academie Julian with Jean Paul Laurens, but left the school to “learn on the streets of Paris” and from the Old Masters in the Louvre.

He exhibited at the Salon d’Automne, a venue for modernist works. However, at this point in his career, he considered himself an impressionist combining influences of French Impressionism, James Whistler, Childe Hassam, and John Twachtmann.

Halpert became a pioneer of modern art in America, having been in Paris at a revolutionary time in the art world during the first decade of the 20th century. His painting was influenced by Paul Cezanne and the French avant-garde, and in adapting the French culture, he had an edge in that he, unlike most American artists, spoke and wrote French fluently. He formed close friendships with modernists Robert and Sonia Delaunay, Fernand Leger, Jean Metsinger, and some of the older artists including Henri Rousseau and Henri Matisse.

After about three years in Paris, he returned to New York, where he met Alfred Stieglitz and became exposed to the avant-garde activities of Stieglitz’s Little Galleries of the Succession (291). He stayed in New York for less than a year before returning to Paris where he developed his own style that embodied Post-Impressionism and Fauvism.

He returned to New York City during 1911 to 1914, the time of the 1913 Armory Show that had such a profound modernist impact on American art. Although he lived and painted in the city, he also painted extensively in the countryside. He exhibited in the Armory Show and encouraged other artists towards modernism including Marsden Hartley. He became close friends and mentor with Man Ray, whose work went towards Dadaism, something Halpert did not embrace.

From 1914 to 1916, he was in Paris and then returned to New York. In 1918, he married Edith Fein, an art student and very adept businesswoman. They lived both in and out of the city, with him painting both landscapes and city scenes. He also painted numerous interior scenes, often with Edith posed as a figure subject. However, his income was minimal, and to supplement, he did mural painting.

The marriage became strained, major factors being that Halpert had constant ringing in his ears and that he felt diminished by her ability to earn much more money than he. It was thought that the ringing in his ears was psychosomatic, but towards the end of his life, they learned it was the result of childhood meningitis.

They spent time in France trying to maintain their relationship, and then returned to New York. In 1926, Edith founded the Downtown Gallery, a very successful venture. In 1927, he became head of the painting department at the Society of Arts and crafts in Detroit, having been recommended by John Sloan. This position brought him some financial success. He stayed in touch with New York family and friends; Edith’s Gallery represented him, and although the marriage broke up, he and Edith remained friends with her as his art dealer.

Just as his finances were strengthening as well as his reputation, the stock market crash of 1929 hit. Halpert died the next year in Detroit at age 45.