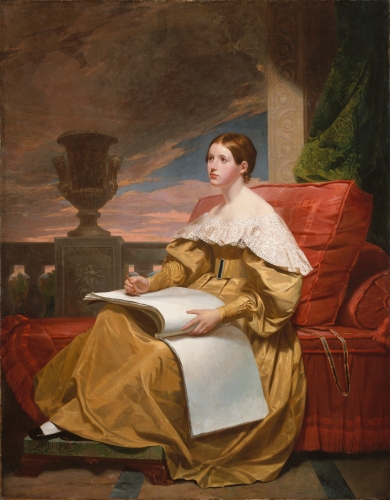 Born in Charlestown, Massachusetts, Samuel Morse was the inventor of the telegraph for which he is most famous, but he was one of the nation’s most recognized early portrait painters, especially known for his depictions of national government figures. He was also the principal founder of the National Academy of Design in 1825 in New York City.

He was the son of a minister and graduated from Yale University in 1810, and went to England in 1811 to study with expatriate painters, Washington Allston and Benjamin West.

In 1815, having returned to American and having earned no attention for classical, academic subjects he had painted in England, he turned to portrait painting. He also did panoramic interiors including The House of Representatives with its eighty-six distinctive and individual portraits of delegates to Washington D.C.

In 1832, he was appointed chair of sculpture and painting at newly founded New York University, but feeling frustrated financially, he turned to spending much more time with his electrical experiments. In 1839, he invented the telegraph and introduced photography to this country by bringing the first daguerreotype camera to the United States.

Although he enjoyed the attention he received for his inventions, he continued to stay active in art circles, serving as President of the National Academy and becoming a charter trustee of the Metropolitan Museum of Art. He was also a charter Trustee of Vassar College and Rutgers University.

He lived primarily in New York but spent his summers in Poughkeepsie in his “Locust Grove” estate he helped to design.